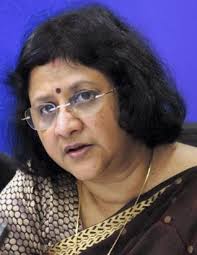 MUMBAI : Stating that its ATM operations are making losses, State Bank of India (SBI), the nation’s largest bank, has said it is all for charging customers for transactions. It also said a commercially viable model is needed for ATM network expansion.
“Whatever services we give, ultimately it has to be a win-win situation…. We just want a commercially viable model, I cannot afford to lose month after month,” State Bank of India (SBI) chairperson Arundhati Bhattacharya told reporter in an interview. SBI, at present, is having the largest network of ATMs.
Ms Bhattacharya also said barring in a few states, the ATM operations are making losses. She, however, did not name the states where the ATM segment is making money. SBI cannot subsidise ATMs forever, she said.
“The loss from ATMs is very concerning. I would like to roll out many more ATMs. I am ready to do that, but I need to explain also how I am going to sustain this.”
When asked about the industry demand that customers be charged for ATM services, especially after the push in costs of ATMs after the Bangalore incident wherein a woman was attacked inside the ATM kiosk, she said SBI supports the idea of charging even its own customers.
“If you are looking at extending the ATM network and making it available to more and more people, there has to be a commercially viable model,” she said.SBI had an ATM network of 32,777 as of September 2013 and has already announced aggressive plans of expansion. The Finance Ministry had mandated that each state-run bank would have an adjoining ATM in place by the end of the ongoing fiscal year (FY14).
At present, banks allow customers five free transactions per month at other banks’ ATMs and unlimited at their own. However, the home bank has to pay the other bank Rs. 15 per transaction, even though the transaction may be for free to customers.