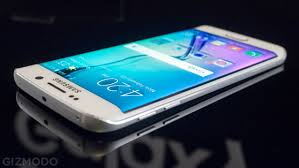 NEW DELHI: Samsung’s flagship smartphones Galaxy S6 and S6 edge will be launched in the Indian market today. The two flagship smartphones were unveiled earlier at the company’s Unpacked 2015 event at MWC in Barcelona ahead of Mobile World Congress 2015.
The smartphones will be showed only to phone reviewers or bloggers those who have an exclusive invitation from Samsung, however, the pricing information is not available yet.

But it is expected that theGalaxy S6 maybe priced between Rs 49,990 and Rs 54,999 while the Galaxy S6 Edge may cost between Rs 64,990 and Rs 69,999.
The Galaxy S6 runs on Android operating system, v5.0.2 Lollipop supported by a Quad-core 1.5 GHz Cortex-A53 and a Quad-core 2.1 GHz processor, coupled with a 3 GBof RAM. Moreover, the device is fronted with a 5.1-inch Super AMOLED display with 1440 x 2560 pixels of resolution and 577 ppi of pixel density and a 5 megapixel of a secondary camera that is featured with 1080p@30fps, dual video call and Auto HDR.
On the other hand, the S6 edge sports the same platform as of the Galaxy S6, however, the device differs from its display as it boasts a 5.1-inch display which is curved to its edges. Also, the Galaxy S6 has a 2,550mAh of battery, whereas the Samsung Galaxy S6 Edge is fueled with a 2,600mAh of battery.