NEW DELHI : BJP leader Giriraj Singh, who kicked up a major controversy following his comments on Narendra Modi’s critics, has reportedly been strongly reprimanded by his own party. Sources say party president Rajnath Singh asked the Bihar leader to refrain from making such comments, which “hurt the party’s interests”.
Yesterday, Giriraj Singh had, at a gatherin 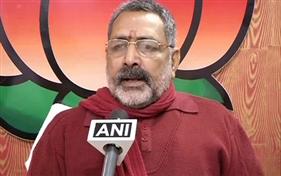 g in Godda district of Jharkhand, said “those who want to stop Narendra Modi (from becoming prime minister) are looking towards Pakistan. In the coming days, they will have no place in India. They will only have place in Pakistan.” The remarks were made in the presence of former BJP President Nitin Gadkari, something that has further added to the party’s embarrassment.
But Mr Singh, BJP’s candidate from Nawada in Bihar, was defiant. “I stand by my statement,” he told NDTV, quickly adding that his words were directed only at “Pakistan-parast log (those favouring Pakistan)”. The Opposition slammed the Bihar leader, demanding action against him by the Election Commission.
“Will they send all the parties that do not come under NDA to Pakistan? I think 90% of the people will have to be sent to Pakistan, as they won’t vote for Modi,” said Congress spokesperson Meem Afzal, adding, “Election Commission should take this into account and send him to jail.””Will complain to Election Commission that Giriraj Singh be arrested for hate speech & for trying to create divide between 2 sections of society,” said senior JD(U) leader KC Tyagi.
Mr Singh’s comments, coming on the back of senior leader Amit Shah’s alleged hate speeches, have provided more ammunition to the Opposition which has reinforced its attack on the BJP, accusing it of pursuing a divisive agenda. The saffron party, led by Narendra Modi, has centred its campaign around development, consciously steering clear of any issue perceived to polarize voters.Opinion polls suggest that the BJP, led by Mr Modi, could win the maximum seats in the national election.