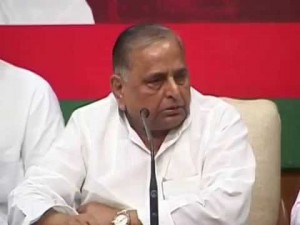 NEW DELHI : The parents of the young student who died after being gang-raped on a moving bus in Delhi in December, 2012, have condemned Uttar Pradesh politician Mulayam Singh Yadav’s comment that three rape convicts sentenced to death in Mumbai “made a mistake” and did not deserve to be hanged.
“If a gang of people rapes a woman, it is not a mistake… it is a crime,” said her father today. “Mulayam Singh considers himself a prime ministerial candidate. If people at such position speak like this, what will our nation come to?”
On Thursday, Mulayam Singh, the chief of Uttar Pradesh’s ruling Samajwadi Party, said, “Boys and girls… they had differences, and the girl goes and gives a statement that I have been raped. And then the poor fellows, three of them are sentenced to death in Mumbai. Should rape cases lead to hanging? They are boys, they make mistakes. We will try and change such laws…we will also ensure punishment for false cases.”
He was addressing a rally while campaigning for the national election at Moradabad.He was referring to the three men handed the death sentence last week under a new law that punishes repeat rapists; they were found guilty of gang-raping a photo-journalist and a telephone operator at different times at the abandoned Shakti Mills in the heart of Mumbai.
Mulayam Singh has promised in his party’s poll manifesto to check “the large-scale misuse” of tougher anti-rape laws enacted after the Delhi gang-rape. Four men were sentenced to death last year for the gang-rape that changed India in many ways. The young woman died in a Singapore hospital 16 days later; she had been repeatedly raped and tortured with an iron road.
Her mother said, “People like Mulayam have no right to stay in power. We appeal to people that such people should not be allowed to come into power. He is encouraging criminals by making such statements and driving the youth towards crime.” Social activist Kiran Bedi said, “These statements call for total boycott of such a political leader. People should be asked to vote out such people completely.”
“That is exactly the reason when such people in power do not deliver and society as a whole feels insecure. This statement is against the society and it is spreading lawlessness,” she said. Noted activist on women issues Ranjana Kumari demanded Mr. Yadav’s arrest in the light of these remarks.Former Chairman of National Commission for Women Poornima Advani said, “Public apology is the least. The Election Commission should take up this matter. This is a negative and useless election stunt which is going to hit him hard. And, I am sure he will be voted out.”