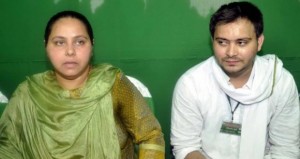 PATNA : Rashtriya Janata Dal (RJD) chief Lalu Prasad’s daughter, Misa Bharti, on Saturday accused senior leader Ram Kripal Yadav – who announced his desicion to quit from all party posts after being denied a Lok Sabha ticket from Pataliputra in Bihar – of portraying a wrong picture. Earlier in the day, Yadav, a Lalu loyalist since 1990, said the RJD had attempted to emotionally blackmail him by using Lalu’s daughter to lull him by a false promise of offering the seat to him.
“He should tell the whole truth. The media too has selectively shown my interview. I had specifically said when the party empowered leaders to take a call on seats before all leaders, each consented to abide by the final decision. He was a party to that decision. Now that the call has been taken, he has rebelled,” Misa told reporters. She said that Yadav had snapped all connections himself even before she could announce the decision to relinquish her claims to Patliputra constituency from the party forum
“The party gave him all the respect he deserved. His decision is unfortunate.” Yadav had gone into a sulk Thursday after Prasad read out a list of 25 candidates for the 27 constituencies RJD and blamed dynastic rule and rule and lack of respect for senior leaders in the party.  ”Who has created this entire drama, me or him?” asked Misa She said that she will contest the elections from Patliputra – the constituency in the middle of the row.
Prasad had despatched Misa to mollify Yadav on Friday but the latter refused to meet his “neice”. Misa had communicated that she was willing to let go of all claims to Patliputra should Yadav wish to fight. Yadav, taking her words as an offer, climbed down late on Friday and flew back to Patna only to be told by Prasad, that “horses could not be changed midstream”, thereby sealing Misa’s candidature for Pataliputra
Yadav, while addressing a press conference on Saturday, said, “It was communicated through media again, that the party chief (Lalu) had said ‘horses cannot be changed mid-stream’, which is when I got the message. I had been in deep pain for the last five days. For a person who gave his sweat and blood, without asking for anything in return, such a cold shoulder was traumatic enough to take”. “It now appears, sending Misaji to reason with me was the party’s strategy to emotionally blackmail me. For a simple man, not given to strategems and one, who does not even own a home despite having been in politics for so long, was too hard to take.
Prasad had nominated Bharti to fight the polls from Pataliputra, where he had himself been a candidate in 2009 and lost it by to his former friend turned foe, Ranjan Yadav, the Janata Dal (United) candidate by 10,000 votes.