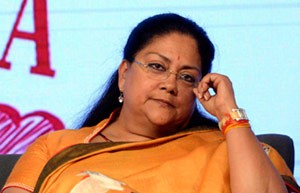 NEW DELHI/JAIPUR: Rajasthan Chief Minister Vasundhara Raje continued her silence on the massive political storm that has engulfed her, speaking about the state’s development at a public function this morning, but refusing to answer questions on an affidavit that the Congress has brandished demanding her resignation for supporting Lalit Modi, a man wanted in corruption cases in India.
Sources in Ms Raje’s party, the BJP, said top leaders from Delhi, including Union Minister JP Nadda, have been tasked with talking to her. But the party is carefully avoiding signs of panic like a flurry of meetings or summoning the Chief Minister for an explanation.

The affidavit that carries Ms Raje’s signature and was allegedly presented to a UK court in 2011, describes as “a full frontal attack” that was “politically motivated,” an investigation against Lalit Modi into a series of corruption cases linked to his stint as chief of the Indian Premier League or IPL.
The Rajasthan unit of the BJP has said it is firmly behind its leader and has ruled out her resignation. It had earlier challenged the authenticity of the documents. Now, Ashok Parnami, state BJP chief, has argued that Ms Raje did not physically depose before court on the matter and said, “We should first wait for the context in which these signatures were given.”
Ms Raje’s influence in her state, where she has delivered big wins in recent elections, is only part of the BJP’s dilemma. The ruling party, say sources, is also determined not to hand more political ammunition to the opposition Congress as Ms Raje is not the only BJP leader caught in the Lalit Modi controversy.
The Congress has also targeted Foreign Minister Sushma Swaraj for backing a request by Mr Modi in the UK for urgent travel documents last year.
Last week, Vasundhara Raje had denied any knowledge of the 2011 document backing Lalit Modi, after the latter outed it in a television interview and underscored that the politician had sought a legal guarantee of confidentiality for her statement.
“She has been lying all along,” senior Congress leader Jairam Ramesh said on Wednesday evening, holding up a copy of the affidavit.  Union Home Minister Rajnath Singh emphasised yesterday, “Our ministers don’t have to resign.”