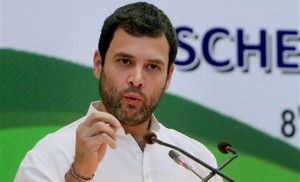 NEW DELHI: Rahul Gandhi has reportedly delayed his return to Delhi once again. The Congress vice president, who was supposed to come back today from his “leave of absence,” will now do so on Wednesday, sources have told today. The 44-year-old has been away for seven weeks and has missed the budget session of Parliament as well as other events important to his Congress party, which has struggled to defend his long absence beyond saying that he needed time to “introspect.”
Congress leaders have asserted that Mr Gandhi will definitely return before Sunday, April 19, when he is expected to address a massive farmers’ rally against a proposal to make it easier to acquire land for industrial and key infrastructure projects.Mr Gandhi, who has positioned himself as a champion of farmers, was seen to be the driving force behind the Congress government’s law in 2013 that said land cannot be acquired without the consent of a majority of the farmers.
Earlier this month, the BJP responded to Mr Gandhi’s ETA with derision. “Are you serious?” questioned the party’s spokesperson Shahnawaz Hussain, apparently borrowing a phrase used with disastrous results by Mr Gandhi’s brother-in-law Robert Vadra in an angry exchange with a reporter a few months ago.
Mr Gandhi’s mother, Sonia, has said at public appearances in Uttar Pradesh and Madhya Pradesh that “Rahul will be with you soon.”
Mr Gandhi went off the political map after a series of electoral disasters for his party, which included a colossal defeat in last year’s national election and this year’s state election in Delhi. However, his party has said he cannot be held accountable for Congress losses.