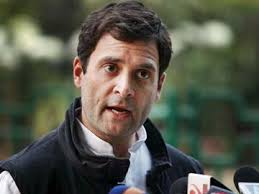 NEW DELHI: Rahul Gandhi has no issue about meeting those senior Congress leaders who have reservations about his leadership, AICC said on Thursday hours after the party vice president returned from his nearly two-month sabbatical.
Giving clear indications that a number of public engagements have been lined up for the Congress Vice President, party spokesperson Randeep Surjewala said Rahul would be speaking to both leaders of Congress party and media whom he would tell about his vision and strategy.
The party, however, refused to divulge the names of places where Rahul visited during his sabbatical saying it was “not important”. There were speculations that Rahul was in Myanmar.
Amid talk that Rahul could be made party chief sooner than later, the party also made it known that a meeting of Congress Working Committee followed by an AICC session would be held soon.
Surjewala, who is communication department in-charge of the AICC said, “Rahul ji is a very seasoned, mature leader and every congressman is always welcome to meet him. Rahul ji has always met any body who wants to meet him without inhibition”.
He was asked whether Rahul would be ready to meet leaders like Amarinder Singh, Sheila Dikshit and Sandeep Dikshit who have underlined the need for continuance of Sonia Gandhi as the party chief and had expressed reservations over Rahul occupying the top slot.
Replying to questions, Surjewala said Congress would intensify its agitation on the land acquisition bill issue with the farmer’s rally on April 19.”Beginning with farmer’s rally at the Ram Lila grounds, Congress will carry this fight vigorously and with utmost vigour from Parliament to small towns and villages in the country”, he said.

Party spokesperson PC Chacko said a number of decisions, which were pending, will now be taken by the Congress President and the Vice President since Rahul ji has come back.

He indicated that a meeting would be held any time after April 19 to finalize the dates for Congress Working Committee, where a number of amendments are to be made.
Decisions like changing the membership pattern in the party and re-introducing the active membership concept are to be taken at the CWC, which will ratified at the AICC meeting.
There are indications that a meeting of the CWC could be soon after the second part of the budget session ends on May 8, which will be followed by a meeting of AICC.
Surjewala insisted that leadership of Sonia and Rahul Gandhi was the “need of the hour” at a time when Modi government has left 54 per cent of Indian workforce-farmers-at the mercy of the weather and gods, forced several farm labourers and small farmers to commit suicide and left the middle class to fend for itself.
Surjewala said that Rahul Gandhi will provide right impetus in Congress thrust to put people’s issues at the centrestage of national agenda.
“What is more important is that the leave of absence was for introspection and not vacation. …To work with greater vigour. I am not entering into the speculation of physical location or place”, he said when asked where Rahul had gone and whether he had gone to Myanmar for carrying out Vipasana meditation course.
“There is great enthusiasm, elation and happiness among crores of Congressmen with the return of Congress Vice President post his introspection.
“Both Sonia Gandhi and Rahul Gandhi have provided leadership, have guided party through ups and downs and have enthused cadres with their charismatic leadership,” he said.