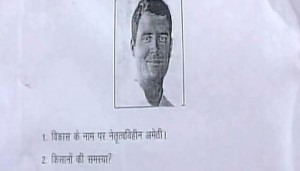 NEW DELHI: Nearly a month after Congress chief Sonia Gandhi granted ‘leave of absence’ from active politics to her son and party vice president Rahul Gandhi, posters declaring reward for any information on the missing Amethi MP have now come up in his Lok Sabha constituency.
Media reports on Wednesday claimed that these posters, some of which have also surfaced in Allahabad and Bulandshahr districts, allege that the Congress vice president lacks vision as he decided to go on leave during the crucial Budget Session for which the party had to face severe criticism from the ruling side.
Some posters also carry a list of problems being faced by the voters of Rahul Gandhi’s Amethi Lok Sabha constituency in Uttar Pradesh. One such poster carries a note “Jane woh kaun sa desh jahan tum chale gaye, na chitthi na sandesh, kahan tum chale gaye (We don’t know which place you have gone to…No messages, no letters where have you gone?)” and an appeal made to the Congress leader in name of “People of Amethi Lok Sabha constituency”.
The posters put up in Rahul’s Lok Sabha constituency highlight 10 major problems being faced by  Amethi: no leadership, no development, poor condition of roads, problems of farmers and students, poor health facilities, no central govt-aided school; slow construction of under-bridge etc.
These posters have come as a major embarrassment for the Congress party, which has alleged that it is the handiwork of BJP.