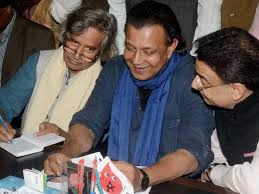 KOLKATA : Rajya Sabha elections are being held in four states today. In West Bengal, from where five upper house seats will be filled, there is high drama with allegations of horse-trading and even abduction.
It’s all in the numbers. Mamata Banerjee’s Trinamool Congress can ensure it gets three of those five seats. For a fourth, it will have to stretch.
The Left and the Congress have alleged that the ruling party is trying bridge that gap by trying to “buy” its legislators or even plain whisking them away to force them to vote for it
On Thursday, Left party, the Revolutionary Socialist Party, filed a missing person diary with the police when one of its MLAs failed to turn up for a meeting and could not be contacted on phone. He was later apparently spotted in the room of a Trinamool minister.
This morning, at least one Congress MLA has been seen at the Trinamool office. Another has reportedly said that since he was elected as a member of the Trinamool-Congress alliance that split in 2012, he cannot vote for the Left candidate and so will vote for Mamata’s nominee.
Both the Left and the Congress have complained to the Election Commission against the Trinamool.
The Congress is now afraid that it might even lose the two MLAs to the Trinamool. The two parties had contested the West Bengal elections in 2011 as allies, with Congress playing junior partner. It has only 42 MLAs in the state. The Trinamool has 184 in a House of 294.
Rajya Sabha elections are also being held in Andhra Pradesh, Assam and Odisha.
The Rajya Sabha has 250 members; 12 of them are nominated by the President and the rest are representatives of the states and union territories and are elected by members of the legislative assemblies for six year terms.
Unlike the Lok Sabha, the upper house is never dissolved. Elections are held to one-third of its seats every second year.