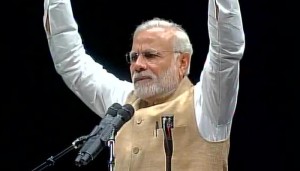 SAN JOSE:Prime Minister Narendra Modi today asked the Indian community in the US for “a certificate” on whether he has fulfilled the promises he had made. The 18,500-strong crowd that packed a California stadium roared a top grade.
Here are the 10 latest developments:
The PM’s hour-long address at a reception in San Jose marked the end of his two-day visit to Silicon Valley, during which he also met tech giants and visited Facebook and Google.
Chants of “Modi, Modi” rose as the Prime Minister entered the SAP Center and also frequently during his speech. For those who couldn’t be present inside the packed stadium, massive television screens were put up outside.
“Today after 16 months, I want a certificate from you. I had said I will not leave any stone unturned… to fulfill the responsibility I have been given by 125 crore people. Every moment of my life I will devote to work. Have I kept my promise, am I working hard?” the PM asked.
So saying, he made yet another attack on the opposition Congress without naming it: “In our country, it doesn’t take much for allegations to come up against politicians… This person made Rs. 50 crore, that son made Rs. 250 crore, that daughter made Rs. 500 crore, someone’s damaad (son-in-law) made Rs. 1,000 crore…” Damaad is seen as a reference to Congress President Sonia Gandhi’s son-in-law Robert Vadra and his controversial land deals.
“Aren’t you sick of all of this? Aren’t you angry? My countrymen, I am standing in your midst. Is there any allegation against me?” the PM asked. “No,” said the audience in one voice.
The PM’s speech was packed with context for his audience. “Did anyone think brain drain can become brain gain? This is not brain drain but brain deposit. When the opportunity comes, it will come to the service of Mother India – with Interest,” he said.
“The magic of your fingers on the keyboard has given India a new identity. You are forcing the world to change,” he told his audience made up of many IT professionals. California has the largest population of non-resident Indians in the US, with a heavy concentration of them in the Bay Area.
The PM began the day with a Townhall at the Facebook headquarters, where, answering a question from Mark Zuckerberg, he broke down as he talked about the hardships his mother had endured while raising her family.
He also visited the Google campus, where Google CEO Sundar Pichai announced 11 new languages on Android next month, including PM Modi’s mother tongue Gujarati. And, high-speed wireless internet service at 500 railway stations in India.
In Silicon Valley the PM met the world’s top tech chiefs, including India-born Satya Nadella of Microsoft and Mr Pichai, sharing his plans for Digital India. He now heads to New York, where he will meet US President Barack Obama.