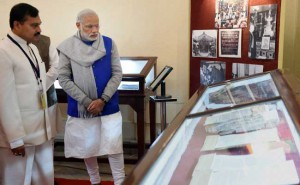 NEW DELHI: On the 119th birth anniversary of Netaji Subhas Chandra Bose, Prime Minister Narendra Modi today put in the public domain, for the first time, 100 secret files on the freedom fighter whose disappearance 70 years ago remains a mystery.

Flanked by Union ministers Mahesh Sharma and Babul Supriyo, PM Modi pressed a button, making public digital copies of the files that were on display at Delhi’s National Archives of India (NAI) where twelve members of the Bose family were present.
“We welcome this step by Prime Minister wholeheartedly. This is a day of transparency in India,” Chandra Kumar Bose, a grand nephew of Netaji said.
PM Modi had, in his meeting with members of the Bose family in October last year, announced that the government would declassify the files relating to the leader.
Two commissions of inquiry had concluded that Netaji died in a plane crash in Taipei on August 18, 1945. A third commission of inquiry and many people, including some of his relatives, have fiercely contested that theory.
“I don’t believe the air crash theory. We may not get all the answers today but I do hope that some indications will be given,” Chandra Bose had  earlier today.  PM Modi had announced that the government would declassify the files relating to the Netaji in October last year.
There are several other theories about Netaji’s disappearance. Two of the recurrent ones – the leader fled to the Soviet Union to continue to fight for India’s independence but was killed. The other says that Netaji returned to India as an ascetic, ‘Gumnami Baba‘, and continued to live in Uttar Pradesh’s Faizabad till 1985.

“So here’s a man. He is a holy man. He is able to write in the handwriting of Subhas Bose in English and Bengali for 30 years. So these are factors which are on record which makes me feel there is something in the Faizabad angle which cannot be ignored,” said author and researcher Anuj Dhar.
The National Archives of India plans to release digital copies of 25 declassified files on Netaji in the public domain every month.The first lot of 33 files were declassified by the Prime Minister’s Office (PMO) and handed over to the the National Archives in December last year.