RAEBRELI: Taking a dig at Narendra Modi, Priyanka Gandhi Vadra today said it is not a 56-inch chest that is needed to run the country but a “big heart” and “moral strength”.The Congress star campaigner was taking a jibe at BJP’s prime ministerial candidate’s “56-inch chest” remark during a rally in Gorakhpur in Uttar Pradesh recently.
“A 56-inch chest is not needed to run this country, a big heart is needed to run it. To run this country cruel force of power is not needed, but moral strength is needed. It needs an internal strength,” Ms Vadra said while addressing a meeting. 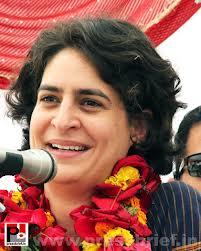 “Such type of strength is needed, which could even sacrifice life to save the culture of the country,” she said. Mr Modi had said during the Gorakhpur rally that it would take a “56-inch chest” to convert UP into Gujarat.
“Netaji (Mulayam Singh Yadav), do you know the meaning of converting UP into Gujarat? It means 24-hour electricity, no power cut for 365 days in every village and street. You can’t do it. You don’t have the guts to turn UP into Gujarat. It takes a 56-inch chest,” Mr Modi had said.
Ms Vadra said this is the country of Mahatma Gandhi and people of all religions, including Hindus, Muslims, Sikhs, Christians, Buddhists and Jains have sacrificed their lives for its freedom.”Dalits and tribals sacrificed their lives for its freedom,” she said.
“This is your country and you are its guard. This is my country and the blood which runs in my veins has mixed with its soil,” Mrs Vadra said, adding, “It your duty to protect the country and the ‘dharma’ of my family”.