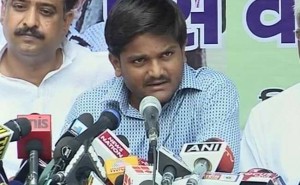 NEW DELHI: Hardik Patel, who is leading mass agitation in Gujarat demanding reservation for Patel community, on Sunday said that he is not a politician and denied allegations that political parties are part of the movement.
“I am not a politician and do not want to be one. No political parties are part of the movement,” Patel said during interaction with media in the national capital.
Hardik Patel, the face of the Patels’ stir for quota in Gujarat, today gave a 48-hour deadline to the government for compensation for the families of nine people who died in last week’s protests in the state, saying if it is not done, there will be “an announcement from Surat”.

The 21-year-old leader of the agitation, who had challenged the BJP last week at a mega rally in Ahmedabad, today said he would take the agitation to Delhi and across the nation if need be.
“We want to take our movement all over the nation,” he said. “We are thinking of holding a protest at Jantar Mantar here in Delhi, and also in Lucknow… This is not a 100 meters race, it is a marathon.”
Mr Patel, who is in Delhi, is expected to hold talks with leaders of other sections demanding reservation — including Gujjars and Jats

“If for a terrorist SC can open at midnight then many things should change accordingly,” Mr Patel said.”According to me 85% of people are poor in India. All the poor should get reservation,” said the leader, who at the same time admitted that reservation had “set India 35 years behind.”
The agitation by the powerful Patel community — who has substantial representation in trade and politics – for reservation in education and government jobs, had left Gujarat roiled last week. Ten people had died in the violence, buses and shops were burned and the army had held flag marches in Ahmedabad, Surat and other cities. Around 5000 para-military forces personnel had been pressed into service as well.
Even Prime Minister Narendra Modi referred to the matter in his monthly radio address Mann ki Baat this morning, saying it had “upset the entire nation”.”Whatever happens to the land of Gandhi and Sardar Patel, the nation is shocked and pained first,” he had said.
Gujarat Chief Minister Anandiben Patel had turned down the Patel community’s demand, since Gujarat has already hit a 50% cap on reservation, a limit imposed by the Supreme Court.
Reiterating his demand for inclusion of Patel community as Other Backward Class (OBC), he said, “I will go wherever the Patel community needs me. We are planning to hold protest across the nation including at Delhi’s Jantar Mantar and even in Lucknow.

The 22-year-old Patel leader added that poor people from all castes should get reservation.Patel added that their protest is not a 100 metre race but a marathon that would continue for at least one or two years.
“This protest is not a 100 metre race, it`s a marathon and it will continue at least for one or two years,” he said.Patel is expected to hold talks with both Gurjars and Jats in the national capital today.