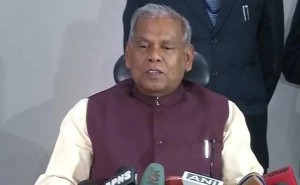 NEW DELHI : The political crisis in Bihar continued on Sunday with JD(U) mulling to stake a claim to form government.Here are the  updates of the events:
• I cannot feature as the rubber-stamp CM of Bihar: Manjhi
​• Will expand Cabinet after Governor’s ascent: Manjhi
​• Will take support of whosoever supports us on the floor of the House: Manjhi
• Will prove majority on February 19, will resign if I cannot prove myself: Manjhi
• I am still the Chief Minister of Bihar and will remain so until the JDU Legislature Party decides otherwise: Manjhi
• The legislature party meet called by Sharad Yadav was illegal: Manjhi
​• Nitish Kumar is being misled: Manjhi
​• I did whatever Nitish Kumar told me: Manjhi
• Nitish Kumar’s real face is out in the open: Manjhi
​• Nitish Kumar is a good man, but he cannot remain without power: Manjhi
• Will not go down without a fight: Manjhi
​• There is no question of resigning: Manjhi
• I didn’t discuss politics with PM Modi but asked for his help for the situation in Bihar: Manjhi
• I met PM Narendra Modi today: Manjhi
• Beleaguered Bihar CM Jitan Ram Manjhi holds press conference in New Delhi.
• I will request the party and urge Lalu Prasad to continue support to Manjhi who hails from mahadalit community: RJD MLA Raghvendra Pratap Singh.
• Section of RJD MLAs in Bihar are against Nitish Kumar and rooting for Jitan Ram Manjhi instead:
• Modi-Manjhi meet concludes after 45 minutes.
• Jitan Ram Manjhi arrives to meet PM Narendra Modi.
• Nitish Kumar has been recognised as JD-U Legislature Party leader by Bihar Assembly Speaker, say reports.
• If they don’t believe us (that we have a clear-cut majority), then we will march to the Governor’s house, if it doesn’t work there will march to Rashtrapati Bhawan in Delhi: Ali Anwar, JD(U)
• We have a clear cut majority, says Ali Anwar of JD(U)
• JD(U) leader Sumit Kumar Singh has claimed that threats were issued to him over his support to Manjhi. “We are being threatened about the consequences of supporting Manjhi ji,” he told.
• State CM Jitan Ram Manjhi refused to comment about the political crisis. When asked about the ongoing crisis in the state, he told ANI, “No comments.” • Bihar Governor Keshri Nath Tripathi will arrive in Patna on Monday.
• Union Minister Ramvilas Paswan voiced his support for Manjhi and said that the Lok Janshakti Party (LJP) will work with Bihar CM. Referring to the ongoing political crisis in the state, he further said that RJD chief Lalu Prasad Yadav and JD(U) leader Nitish Kumar are “writing the script,” the ANI reported.
• Ahead of expected meeting with PM Narendra Modi, Manjhi today put up a brave face, saying “Manjhi’s boat never sinks” even as he is scheduled to meet Prime Minister Narendra Modi this evening to discuss the political crisis in Bihar. Manjhi, who was sacked as the JD(U) legislature party leader at a meeting of the party’s MLA’s yesterday, shot back when asked about his fate, saying “Manjhi ki nao kabhi nahin dubti hain (Manjhi’s boat never sinks)” but declined to make any further comment. Meanwhile,  PTI reported. ​ JD(U) leader KC Tyagi alleged that the “script” of the ongoing political crisis has been written in Delhi. “This script has been written in Delhi. Amit Shah is the director and at the behest of him, there has been a conflict in the JD (U). At the behest of him, efforts are being made to dissolve the legislative assembly,” JD (U) leader KC Tyagi.
• The BJP on Sunday said that former chief minister Nitish Kumar and Janata Dal (United) chief Sharad Yadav are responsible for the political instability in Bihar. “Sharad Yadav and Nitish Kumar are to be held accountable for the present political instability in Bihar. The BJP will take a decision after viewing the result and whole situation carefully,” said BJP spokesperson Prem Prakash Ranjan, the PTI reported.
• Nitish Kumar has agreed to parade 130 MLAs in his support at Raj Bhavan tomorrow. However, the time is still not decided.• Meanwhile, JD(U) leader Sharad Yadav has written a letter to Manjhi asking him to resign since he is not the leader of legislature party anymore.
• JD(U) today accused BJP of plotting a split in the party and said it was willing to parade 130 MLAs — more than the majority in the 233-member Bihar Assembly — before the governor or the President in a show of strength. Party spokesperson KC Tyagi suggested that Bihar Chief Minister Jitan Ram Manjhi was working at the BJP’s behest and said he had no right to attend the NITI Aayog meeting in the national capital as he no longer enjoyed the confidence of the majority of MLAs after JD(U) lawmakers elected Nitish Kumar as their new leader in Patna yesterday.
• JD(U) leaders submitted letters of support to the Governor’s office reportedly proposing to form a government in the state under the leadership of former chief minister Nitsh Kumar. Leaders of Congress, RJD and other independent candidates were also present.• Manjhi, who is in New Delhi to attend the NITI Aayog meeting, had sought time to meet Modi yesterday. He is also likely to seek special status for Bihar from PM Modi.
• Bihar Chief Minister Jitan Ram Manjhi is expected to meet Prime Minister Narendra Modi in the national capital at 5 pm today. The political crisis in the Bihar continued on Saturday with JD(U) leader Nitish Kumar likely to hold a meeting with senior party leaders on Sunday. The meeting is scheduled to take place a day after Nitish was re-elected as the legislature party leader by 97 out of 115 MLAs of the party.
The support for Bihar Chief Minister Jitan Ram Manjhi within the party seems to be on the decline after he was criticised for his poor governance by the state unit.
Manjhi had also suggested dissolution of state Assembly in the state Cabinet meet yesterday which was supported by seven members while 21 others opposed it.