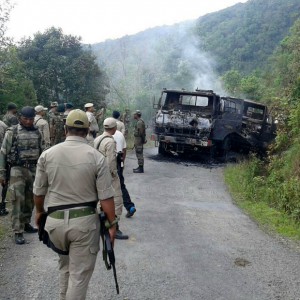 NEW DELHI: According to reports, NIA has got a major breakthrough in cracking the Manipur ambush case. The investigation agency has arrested  top leader of NSCN(K) allegedly involved in the conspiracy behind the June 4 killing of 18 Army personnel in Manipur on the Indo-Myanmar border.
According to initial reports, Khumlo Abi Anal, NSCN(K) regional commander, was arrested from Chandel district of Manipur.In one of the deadliest casualty for Army in recent years, 18 soldiers were killed and 11 seriously injured in an ambush by insurgents in Manipur’s Chandel district on June 4.
A four-vehicle convoy of 6 Dogra regiment, which was on a road opening patrol (ROP) along Tengnoupal-New Samtal road, about 80 km from Imphal, was targeted first by a powerful improvised explosive device (IED) and then by rocket-propelled grenades (RPGs) and automatic weapons.
Army officials in New Delhi said the incident happened at around 9 in the morning. when the convoy reached a place between Paralong and Charong villages. A suspected insurgent was also killed. After the Kargil war of 1999, it was  of the heaviest casualties that the army has suffered. In 2002, a militant attack at Kaluchak near Jammu in a bus and army camp had killed 34 people, including 22 armymen and their family members and seven passengers.
India subsequently mounted a counter operation venturing into the Myanmar border inflicting massive damage in the rebel camps and killing 38 insurgents .