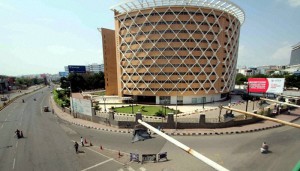 HYDERABAD: Chief Minister Chandrababu Naidu may announce on Thursday which city will be crowned as the new capital of Andhra Pradesh. Reports said Naidu may make the announcement post 12 noon. The announcement was expected Tuesday but was delayed, as per sources, due to astrological reasons.
The government is expected to pick the stretch between Guntur and Vijayawada towns as the new state capital. Land prices have already soared there over the past month in anticipation of the move. However, opposition parties are not happy with the reported choice and will protest an announcement to this effect.Telangana was carved out of Andhra Pradesh in June and the present state capital Hyderabad will be shared between the two states for 10 years. Post that period, Telangana will have claim over the IT city. Naidu has said that he will create a new capital and model it on the lines of Singapore.