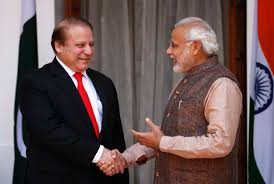 ISLAMABAD: Shortly after welcoming today’s meeting between Prime Minister Narendra Modi and his Pakistani counterpart Nawaz Sharif, leaders and the media in Pakistan have criticised the government over the absence of any mention of Kashmir in the joint statement.
Mr Sharif met Prime Minister Modi in the Russian city of Ufa on the sidelines of the Shanghai Cooperation Organisation (SCO) programme. India and Pakistan issued a joint statement that mentioned terrorism and the need to expedite the Mumbai trial. Kashmir, however, was not mentioned, which leaders and media in Pakistan have criticised.
Shah Mehmood Qureshi, former foreign minister and leader of Pakistan Tehreek-i-Insaf (PTI), told Pakistan’s Express TV channel that Kashmir should have been mentioned in the joint communique
“It is quite strange that Kashmir has not been part of the statement,” he said.
Senator Rehman Malik of Pakistan People’s Party (PPP) said that PM Modi was disrespectful towards Mr Sharif and behaved like a Tsar, forcing the Pakistani premier to walk through a long corridor to come towards his “throne”.
“Prime Minister Modi didn’t show the slightest courtesy under diplomatic norms for his Pakistani counterpart to walk a few steps forward to receive him,” he said.Talat Hussain, a prominent anchor of Pakistani news channel Geo TV, said that it was Mr Sharif’s failure to get Kashmir mentioned in the joint statement.
He said it looked as if Nawaz Sharif was just trying to please Narendra Modi.”I think government was in a hurry to get a positive response from India,” he said.
Senator Sehar Kamran, who heads Centre for Pakistan and Gulf Studies (CPGS) think-tank also criticised the joint statement.”The statement, only mentions the Mumbai case trial, but fails to highlight the lingering Kashmir dispute which is a lost opportunity.

“Kashmir is the jugular vein of Pakistan and the resolution of the Kashmir dispute lies at the heart of future prospects for regional peace and stability,” she said.Pakistan’s Foreign Office has not commented on the absence of any mention of Kashmir in the joint statement.