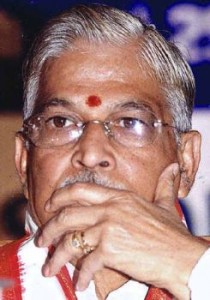 VARANASI:supporters have launched a signature campaign to demand that he contest next month’s general elections from Varanasi in Uttar Pradesh, a temple town that has recently been awash with posters of the sitting member of Parliament and BJP veteran Murli Manohar Joshi. The posters have now been pulled down because of the model code of conduct.
Dr Joshi, 80, has seemed in early campaign mode in haste impelled by the strong buzz that his party could pick Varanasi as the constituency that Mr Modi, its prime ministerial candidate, will contest. Dr Joshi is reportedly not inclined to surrender his seat.
Dr Joshi’s wife hurriedly inaugurated a party office in the city recently and released a book that calls him a man of development who has spent 19 crores from his MP’s fund to develop the constituency. People in the city are receiving phone calls from Dr Joshi’s office asking them to vote for the BJP.
The message is intended to be subtle, and Dr Joshi’s supporters bristle at the suggestion that he is staking claim to a ticket. “It’s flippant to say that Joshiji is getting all this done to lobby for the Varanasi seat,” said Sanjay Bharadwaj, a local BJP leader.  Party workers at a Modi rally in Lucknow chanted recently, “Modiji tum raaj karo, Joshiji tyag karo. (Modiji may you rule, Joshiji you must make a sacrifice.)”
Varanasi is not only considered a safe seat as a BJP stronghold, party workers also feel that if Mr Modi contests from here it will galvanise the entire UP region – called Purvanchal – to return to the BJP. In 1998, the BJP bagged 24 of the 32 Lok Sabha seats from this region. In 2009, it was down to just four, with the Samajwadi Party and BSP gaining at its cost.

There is also the symbolism of the BJP’s prime ministerial candidate and the man long seen as a “Hindutva mascot” contesting from one of the three temple towns in UP important to the Rashtriya Swayamsevak Sangh. The other two are Ayodhya and Mathura.

Mr Modi addressed a massive rally here in December. The city was also one of those picked for his high-voltage chai-pe-charcha or discussion over tea programme last month.

Dr Joshi is one of the senior BJP leaders who was opposed to Mr Modi being projected as the party’s presumptive PM.