NEW DELHI : As the national election reaches a climax today, the BJP’s prime ministerial candidate Narendra Modi seeks a personal mandate in Varanasi. His chief challenger is Arvind Kejriwal of the Aam Aadmi Party.Early controversy hit the star constituency this morning. The BJP and the Aam Aadmi Party have complained against Congress candidate Ajai Rai for turning up to vote with a party symbol badge pinned to his kurta. 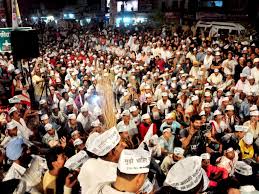 The rival parties have also complained that Mr Rai was talking to other voters while waiting in line to vote. Election rules disallow a candidate from any act that might influence voters at the polling booth.Days ago, the Congress had complained against Mr Modi for displaying his party symbol after voting in Gujarat. Long queues of voters have been reported since polling began in Varanasi, which is a fortress today with about 18,000 security personnel deployed.
Mr Modi is the first prime ministerial candidate to contest from the 3,000-year-old city where several religions mingle. Varanasi is an ancient centre of Buddhism, but one in six voters is Muslim; Hindus believe that to die here brings salvation by escaping the cycle of reincarnation.
A triumph in the city – one of 41 seats in Uttar Pradesh, Bihar and West Bengal which are voting on the final day of the five-week general election – would crown a gruelling campaign by the 63-year-old chief minister of Gujarat in his attempt to lead his BJP back to power after a decade in opposition.Campaigning mainly on promises to create jobs and restore India to a path of high economic growth, Mr Modi, whose critics accuse him of harbouring Hindu supremacist views, has largely steered clear of religion.
Mr Modi “will win the election from this Varanasi constituency with a large majority”, BJP president Rajnath Singh told reporters as campaigning wrapped up at the weekend. All other candidates would “lose their deposits,” he predicted.The Congress and Mr Kejriwal are fighting for the 15 per cent Muslim vote in the city. Mr Kejriwal dismissed the Congress this morning saying, “Where is the three-way battle? Ajai Rai is nowhere in the picture. Battle is clearly with Modi but the atmosphere has changed, people are now saying Modi will lose.”
But Mr Rai asserted, “Development will be talked about by only that person who stays in Varanasi… People are not going to like somebody who stays on rent in Varanasi.”On Saturday, Congress Vice President Rahul Gandhi held a roadshow to campaign for Mr Rai.