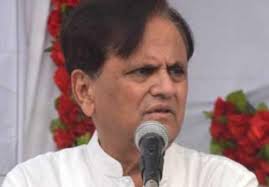 AHMEDABAD : Escalating the war of words over Narendra Modi’s humble background as a ‘chaiwala’, Congress on Sunday said BJP’s PM candidate, who often flaunts his past to connect with voters, was never a tea vendor but a “canteen contractor”.Senior leader and Congress president Sonia Gandhi’s political secretary Ahmed Patel also termed Modi’s much-hyped campaign ‘Chai pe Charcha’ as a poll gimmick.
“This chai pe charcha is natak (gimmick) keeping in mind the elections. Tea seller associations have told us that he was never a tea-vendor but he was a canteen contractor,” Patel said without naming Modi.
He was speaking at the ‘Swaraj Kuch’ rally in Ahmedabad where noted civil rights activist Lalji Desai, along with hundreds of his Maldhari community followers, joined Congress.
Accusing Modi of trying to appropriate the legacy of Sardar Patel, the Congress leader said, “By making the tallest statue of Patel, he wants to make a ladder for the PM’s chair.”Patel also took potshots at Modi’s Gujarat model of development.
“This cannot be Gujarat’s model. Gujarat’s model is based on Mahatma Gandhi and Sardar Patel’s ideology. Some people accidentally got power and then forgot the ideology of great leaders like Gandhi, Sardar Patel and Ambedkar.
“But when election comes, they begin chanting their (leaders’) names. He suddenly transforms himself into a tea-vendor or a Ram Bhakt only when the elections are coming,” Patel said.
Taking a dig at Modi’s claims of development, Patel said Gujarat was a laggard in social sectors.
“Gujarat is lagging behind in health, education and other social sectors. As per his propaganda, Gujarat is number one, but from the bottom. Gujarat is on 28th rank as far as primary education is concerned.”
“Unemployment rate is increasing, five lakh young people are serving the state on a meagre fixed salary. For showing the surplus in the state’s budget, Gujarat government keeps taking debts and now the debt amount has reached up to Rs. 1.85 lakh crores,” Patel said.
He also appealed to all marginalised communities to unite and raise their issues.“This will strengthen Congress and also those on margins who have been deprived of their rights under BJP rule”, Patel said.Modi has made senior Congress leader Mani Shankar Aiyar’s jibe at his humble origins, when he sold tea with his father, a political weapon to hit out at Congress while connecting with the masses.
In the first session of the ‘Chai pe Charcha with NaMo’ (tea with Modi) initiative on Wednesday, Modi attacked Congress over governance and black money stashed in various bank accounts abroad.
The Leader of Opposition in Gujarat assembly Shankarsinh Vaghela raked up the 2002 communal riots under Modi’s guard to target him. “He is now demanding 60 months against Congress’ government’s 60 years. People have not forgotten those 100 days when the massacre was done under his nose as the chief minister,” he added.
State unit Congress president Arjun Modhvadia said the controversial godman Asaram was once the “mentor” of Modi.
Desai, who joined Congress today, has initiated a movement against declaring Bechraji and Dholera as the Special Investment Region (SIR). He had earlier been detained by state police for allegedly instigating farmers to protest against the SIR.