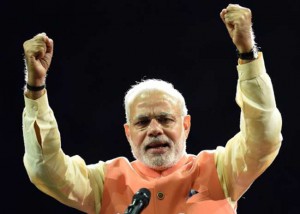 NEW DELHI : Prime Minister Narendra Modi will campaign from Saturday in Maharashtra, where his BJP is newly single after ending a 25-year alliance with the Shiv Sena.He is expected to address some 24 rallies ahead of polls for the state’s 288 seat assembly on October 15.
After its success in the national election, the BJP hopes to win big in Maharashtra, which has been co-governed by a Congress-led coalition for 15 years. But it won’t be easy – for the first time in many years, it is contesting without its oldest ally.
It is banking on what it believes is a “Modi wave”, giving the PM sole credit for its near sweep in May.
PM Modi, who just ended a high-profile visit to the US, will open his Maharashtra blitz with rallies in Mumbai and Kolhapur, the party has said.This will be the 64-year-old prime minister’s first visit to the state since his party’s acrimonious break-up with the Shiv Sena last week over seat sharing for the polls.
Speaking to NDTV on Tuesday, Sena Chief Uddhav Thackeray blamed the BJP for the split, saying that his party tried to save the alliance till the end.
“We thought this was Amar Prem but it became Kati Patang,” Mr Thackeray, 54, quipped on NDTV’s Walk The Talk.He also alleged that the BJP initiated the divorce because it wanted to tie up with the Nationalist Congress Party (NCP) of Sharad Pawar.
The split was reportedly driven by Mr Thackeray’s wish to be made the chief minister if the combine won the state election. The BJP wanted more seats than the Sena was prepared to share.For the first time in many years, Maharashtra could witness a four-corner battle with both alliances falling apart.
The NCP announced its split with the Congress just an hour after the BJP called off its long-term partnership, raising speculation that both parties were secretly in touch.
PM Modi will also campaign extensively in Haryana, the other state going to polls on the same day. In Congress-ruled Haryana too, the BJP has ended its alliance with ally Kuldip Bishnoi.