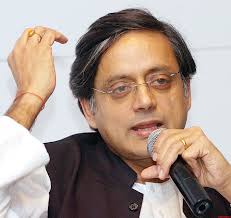 NEW DELHI : Congress MP Shashi Tharoor, who only recently earned the party’s wrath for praising Narendra Modi, says in the Prime Minister “we are all seeing a master communicator at work” but hit out at BJP for “promoting a nakedly bigoted Hindutva agenda”.
Noting that communication has been a major strength of the NDA government, particularly Modi, he said, “The Prime Minister is very effective in speech-making, comes up with slogans, sound bites, photo ops in quite an unparalleled way.
“There is no question that we are all seeing a master communicator at work. And that has its merits but it is not enough.”Tharoor has praised Modi quite a few times recently which was frowned upon by Congress. Last year, he was removed as party spokesperson for his praise of Modi.
He, however, said not much of what Modi has promised has been implemented.”After all, the people who voted for Modi thought they were voting for a man of action. So far instead of a man of action, the nation has got a man of words and the real question that comes is when these words get translated into results,” the former diplomat-turned politician told this to a News Agency pti.
“Consciousness raising is fine and the Prime Minister has raided consciousness on some issues but implementation is essential. The gap between rhetoric and results in Modi’s government is wide enough to drive a rath through,” he said.
He also dismissed rumours that he is cosying up to BJP, saying he will remain a Congressman.Tharoor, who has recently come out with a book “India Shastra: Reflections on the Nation in Our Time”, took strong exception to some saffron leaders’ recent comments.\
“The party and the political machinery that Modi is riding to get to his goals is a profoundly illiberal. The language used by RSS and saffron leaders is simply divisive and not unifying.
“You can’t say ‘sabka saath sabka vikas’ and then have ministers using outrageous language. You can’t have leading lights of the party hailing (Nathuram) Godse and talking about how many children women should bear,” he said.
“Your party is simply promoting a nakedly bigoted Hindutva agenda,” Tharoor said.He also questioned Modi for not taking a tough stand on his ministers for their comments, saying, “Instead of silencing them, Modi himself is silent on the issue.
“This silence of the Prime Minister tantamounts to condoning it and if you condone it you are undermining your own declared objective.”Tharoor said he would have probably delayed publishing his
new book, which has two sections devoted to Modi, had the last Lok Sabha election not so overwhelmingly favoured BJP.”I probably would not have published the book right now because honestly ‘India: From Midnight to the Millennium’ was my look at the whole 50 years of India’s independence, society, politics, culture, economics; and the ‘The Elephant, the Tiger and the Cellphone’ was a 10-year update on the 60th anniversary.
“I would probably waited for the 70th or the 80th anniversaries to conclude the trilogy. But when this election result happened, David Davidar (of publisher Aleph) said this is the perfect time for stock-taking — where India has headed and where we have come.”
He said so the timing of this book has definitely been prompted by this watershed election and the emergence of the Modi era.
Asked whether he would write a book exclusively on the Congress and the UPA government, he said, “What I needed to say has been said in this book.
“I don’t think I have anything enough to add to make it worthwhile. So to my mind let others who are not as caught up in the internal politics of the country, outside scholars, observers analysts take a look at that.”There is a section in “India Shastra” called ‘The Legacy’ which is about the “legacy left” to this government by Congress and UPA.
“So there are chapters not only on the earlier legacy from the 40s onwards, Nehruvian legacy, the hijacking of history and Sardar Patel. There is also material on Nehruvian socialism or Nehruvian consensus which has been challenged by the Modi government.
“And on the rule and achievements of the UPA government under Manmohan Singh. Plus there is a chapter on steps forward for the Congress party to take as it seeks to revive itself in the new era,” he said.