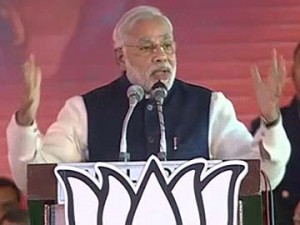 NEW DELHI : BJP’s prime ministerial candidate Narendra Modi Sunday attacked the Congress for not naming a prime ministerial candidate, and said the country’s oldest party was falling apart.
Speaking on the final day of a three-day leadership meeting here, Modi said the Congress had been allowed to rule India for six long decades, and it was time the BJP gets a chance to govern for 60 months.
Addressing thousands of delegates at the Ramlila Maidan, he said the Congress did not dare to name a prime ministerial candidate because it was sure it would be defeated in the electoral battle.
The Congress has said its vice president Rahul Gandhi would lead the election campaign but not be the prime ministerial nominee — as the party picked a prime minister only post elections.
The Gujarat chief minister challenged the argument.
He asked how the Congress nominated Rajiv Gandhi as the prime minister immediately after his mother and prime minister Indira Gandhi was assassinated in 1984 if it believed in democratic traditions. “Did any meeting of the Congress Parliamentary Party (CPP) take place (then)? Did the CPP elect a PM? Are there any minutes of that meeting?”
Similarly, he went on, the CPP elected Sonia Gandhi as its prime minister after winning the 2004 Lok Sabha battle but it was she who unilaterally picked Manmohan Singh for the top job. He said the just ended Congress leadership meet here was all about “how to save the Congress, how to keep the party united.
“This was the thrust of their discussions… They were trying to save the party, we are trying to save the country. This is the basic difference (between us) in the coming (Lok Sabha) election.”
The 2014 polls, he said, were about igniting the hopes of India — and different from all previous elections.
“Our country was never in such a bad shape,” he said, targeting in particular corruption, rising food prices, farmer suicides, unemployment and attacks on women since the Congress-UPA took power in 2004.“We have never seen such corruption as we saw in the last decade.”