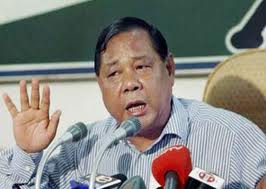 SHILONG: Former Lok Sabha speaker Purno A. Sangma Monday returned to the national political scene by announcing his candidature from the Tura parliamentary seat on a National People’s Party (NPP) ticket.Meanwhile, sitting MP and Sangma’s daughter Agatha K. Sangma, the youngest parliamentarian in the current Lok Sabha, quit the Nationalist Congress Party (NCP) to join her father and the NPP.
Agatha, who won the Lok Sabha election on debut in the 2008 by-poll, decided not to contest the April 9 elections to make room for her father who had earlier represented the constituency.“I have resigned from the NCP and decided not to contest in the elections and shall be paving the way for my father to contest from Tura,” Agatha told media by phone from New Delhi.The former union minister said she took the decision keeping in view the deteriorating law and order situation in Meghalaya and the overall lack of governance.
“I strongly felt it has become the need of the hour for my father to come back to active politics and give his valuable contribution in building the nation,” Agatha said Sangma said he decided to return to national politics after leaders of various parties felt he should be present in parliament.“Leaders from different political parties, even those from the Congress, requested me to return to national politics to contribute in parliament. Moreover, people from the Garo Hills also felt there is a need for a known face in parliament,” he said.Sangma’s foray into politics began in 1977 when he won the Lok Sabha elections from Tura on a Congress ticket.
He went on to win the Lok Sabha elections in 1984, 1991, 1996, 1998, 1999 and 2004 besides the by-election in 2006. In 2004, he contested as a Trinamool Congress candidate.For a brief period – 1988 to 1990 – he was Meghalaya chief minister.After returning to state politics in 2008 he vacated the Tura parliamentary seat for his daughter Agatha. Agatha also won the election in 2009.