NEW DELHI : `Bourbons have learnt nothing, they have forgotten nothing.’ French historians on French rulers Bourbons.Kolkata: And when West Bengal Chief Minister and Trinamool Congress leader Mamata Banerjee mildly reprimanded her abusive MP Tapas Pal and tends to wind up the case with his unconditional apology but blamed media “for hatching a conspiracy against Pall’’ (read) to defame her party nationally, she tends to become next Bourbons of Bengal! 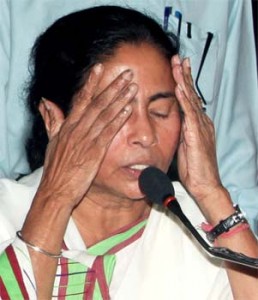 It’s not that she didn’t sense nationally loss of face or doom, but like the past rulers CPI(M),  much like them she stood by an agent provocateur’ (though an alarmed Banerjee warned partymen to maintain balance while making speeches in public), she exposed her tendencies not to learn form history, said a political observer
`Though the number of FIRs filed in various police stations against Pal for instigating sexual crimes against women are enough for police to seek permission from LS Speaker to put him behind bars, we will watch what happens next,’’ said a former Calcutta High Court Judge.
Incidentally, she blamed media not only for hatcing a conspiracy but also for not stirring up heat and dust adequately when their leaders usedabusive epithets against her on several occasions in past. “Unfortunately, Mamata Banerjee forgot very quickly how then we stood by her and black listed the Left Big Brother’s infamous men forcing CPI(M) to take strictest possible action against them,’’ recalled a noted political commentator.
However, with National Commission for Woman, having already taken cognizance of MP’s utterance, observers here believe that all will not be forgiven and Parliament may witness privilege motions against her party and Pal’s unforgiveable speeches where he warned supporters of opposition activists that “he would send his boys to rape their women and got them shot them by revolvers….’’