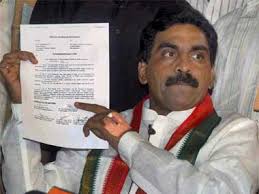 NEW DELHI : Lagadapati Rajagopal, the man now known as the “pepper spray MP,” has resigned from Parliament and has announced that he  is quitting politics, dismayed at the Lok Sabha passing the bill that creates a separate Telangana state by bifurcating Andhra Pradesh. “I’m hurt as Telugu-speaking people are divided now. It is a sad day. I have lost interest in politics,” Mr Rajagopal told reporters.
The Congress lawmaker earned notoriety last week when he jumped into the well of the lower House and unleashed an aerosol from which he splashed pepper spray on his colleagues during an unprecedented five minutes of violence and vandalism. MPs rushed out the house holding handkerchiefs to their face. Many, including Mr Rajagopal, were taken to hospital. He said he acted in self-defence.
He was among 16 MPs from across parties who were suspended for the violence and so were not present in the Lok Sabha today when the Telangana bill was passed. These MPs belong to Seemandhra – the non-Telangana regions of Andhra Pradesh that oppose bifurcating the state. Mr Rajagopal had vowed he would do all he can to block the Telangana bill in Parliament.
The 53-year-old MP from Vijayawada is among the richest MPs from Andhra Pradesh, with some 299 crores to his name according to his affidavit to the Election Commission in 2009.He had in 2009 introduced a private members bill in the Lok Sabha to deal with disruptions by lawmakers and even suggested a mechanism to penalise them. He was the first Andhra Pradesh MPs to send in his resignation as soon as the Centre announced its plans to carve out Telangana in 2009.
Mr Rajagopal is a mechanical engineer. In 1986, he married the daughter of former union minister P Upendra. In 2002, quit his job with a private company to join politics.He won the Vijayawada seat for the first time in 2004, and retained it in 2009.Mr Rajagopal’s critics allege that his opposition to the division of Andhra Pradesh is linked to his personal interests; he is believed to have massive investments in Hyderabad, the planned capital of the new state, and parts of Telangana.