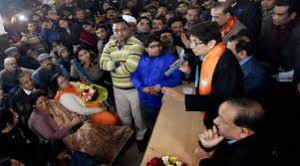 NEW DELHI : In an open jeep, with multiple garlands around her neck and BJP leaders surrounding her, Kiran Bedi is holding a road show down the narrow lanes of  Krishna Nagar, the east Delhi constituency from which she is contesting her first election.
She dismissed comparison with her chief rival Arvind Kejriwal’s roadshow yesterday, but the difference was stark. Hundreds of supporters had joined the Aam AAdmi Party chief as he traveled seven kilometers in fours hours on an open truck on Tuesday, missing a 3 pm deadline to file his nomination papers.
Ms Bedi’s road show has a few cars and some supporters running alongside.
It is clearly designed as a show of unity after open dissent among party workers in the Delhi BJP over ticket distribution for the Delhi assembly elections. On the jeep with Ms Bedi is union minister Dr Harshvardhan, who held this seat earlier and is widely seen as having been sidelined with Ms Bedi being named the BJP’s chief ministerial candidate.
“On my way to file my Nomination in Krishna Nagar Constituency. To Serve the City which stole my heart as a 14 yrs old junior tennis player!” tweeted Ms Bedi early today. Mr Kejriwal too will file his papers today, as will the Congress’ Ajay Maken.
Kiran Bedi and Arvind Kejriwal are vying for the post of Delhi chief minister. Both their parties dismiss the Congress as irrelevant in these elections.
The BJP announced on Monday that Ms  Bedi, a rank newcomer in the party, would be its presumptive chief minister. It has fielded the former top cop from one of its safest seats in the capital.
Against Mr Kejriwal on the New Delhi constituency, the BJP has put up Nupur Sharma, a young London School of Economics graduate and a former student leader, in what is being seen as handing the AAP chief a cakewalk.
The party has also decided to field a newcomer against the Congress’ Greater Kailash candidate Sharmishta Mukherji, who is the daughter of President Pranab Mukherjee.