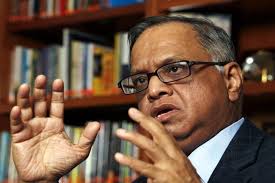 MUMBAI: As he signed off his second innings at Infosys, industry icon N R Narayana Murthy on Saturday said the nation’s second largest IT services firm Infosys had “diluted focus on meritocracy and accountability” in the past decade, forcing him to take “hard and tough decisions.
” Addressing shareholders for the last time as Executive Chairman, Murthy, who earlier this week announced that he along with his son Rohan have decided to step down full four years ahead of their term, said his “work was done” and hoped that the new CEO Vishal Sikka would chart a new course without any interference from founders. “…fairness, transparency, meritocracy and accountability are the key to success for any enterprise.
Somehow, the company had diluted its focus on meritocracy and accountability during the last decade,” Murthy said at the 33rd Annual General Meeting (AGM) here.
Describing Sikka as a technology visionary, Murthy said he had carried out the mandate that the Infosys board had accorded him about an year ago. Sikka, whose appointment was announced on June 12, was not present at the Annual General Meeting as he was on his way to the US. Thirty-three years since its inception, the Indian IT behemoth appointed its first non-founder CEO in Sikka, who was roped in from outside. Analysts believe this could be the “fresh start” that Infosys needed as it has lagged behind peers like TCS and HCL Technologies.
Murthy, who founded Infosys along with six engineers in 1981, bid adieu to the over USD 8 billion entity for the second time. He was called back from retirement last June.
Defending his decision to bring in his son, Rohan, Murthy said he wanted to bring in a “fresh perspective to the field” and focus on the use of “technology and high quality people.”