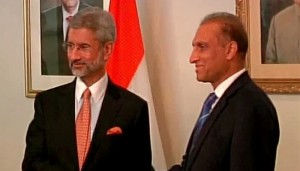 NEW DELHI/ISLAMABAD: Foreign Secretary S Jaishankar said on Tuesday that he was glad to be in Islamabad as part of the Prime Minister Narendra Modi’s SAARC Yatra initiative.
Interacting with the media after his talks with his Pakistani counterpart Aizaz Ahmed Chaudhary, Jaishankar said that India would like to work with Pakistan to help SAARC achieve its potential.
He further said, “Pakistan is next SAARC Chair,” adding that his visit to Pakistan has provided both the nations opportunity to discuss bilateral relations.“Visit provided opportunity to discuss bilateral rltns (Indo-Pak), engaged on each other’s concerns & interests in open manner,” Jaishankar said.
Further reiterating his concerns over the ceasefire violations, Jaishankar said, “I reiterated our known concerns on cross border terrorism, including on Mumbai case.”
“Naturally, my visit provided an opportunity to discuss our bilateral relations. We engaged on each other’s concerns and interests in an open manner. We agreed to work together to find common ground and narrow differences. I reiterated our known concerns on cross-border terrorism, including on the Mumbai case. We agreed that ensuring peace and tranquillity on the border was vital. Our talks were held in a constructive and positive atmosphere,” he added.

“I conveyed the expectations of our leadership on SAARC and their determination to forge a cooperative relationship with all our neighbours. We discussed ideas and initiatives to take SAARC forward. Pakistan will be the next SAARC Chair and India would like to work with Pakistan to help SAARC achieve its potential,” he said, ANI reported.
Meanwhile, Pakistan Foreign Secretary Chaudhary later told reporters that Jaishankar also delivered a letter from Prime Minister Narendra Modi to Premier Nawaz Sharif.
Chaudhary said that during the talks he raised the issue of alleged Indian involvement in militancy in Balochistan and the tribal region.”We raised Indian involvement in Balochistan and Fata (Federally Administered Tribal Areas). We also raised the Samjhauta train attack in the talks,” Chaudhary said to a News Agency .
He said the two sides discussed the peace process and they would decide on start of talks after reviewing the meeting of the Foreign Secretaries.”They (Pakistan and India) would reflect on the meeting and then decide how to proceed about peace process,” Chaudhary said, adding that no time-frame can be given for start of the peace dialogue.
The Foreign Secretary said that the issue of clashes along the Line of Control and the Working Boundary in Kashmir also figured in the talks.”Pakistan insisted that 2003 ceasefire should be respected,” he said.During the talks, the Pakistani side also asked for more people to people contacts and sports events, Chaudhary said.
Responding to a question, he said Pakistan was ready to host the 19th SAARC summit and all leaders including, Prime Minister Modi will be invited for it.
Prime Minister Nawaz Sharif, on the other hand, said that it is imperative that the leadership in Pakistan and India should rise to the expectations of their people and the two nations need to start a “new chapter” in ties by working towards resolving all outstanding issues through dialogue.