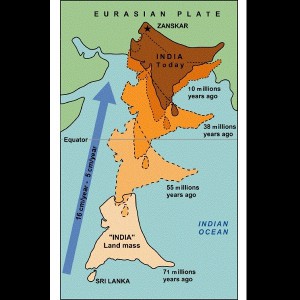 For years, scientists have struggled to explain how India could have drifted northward so quickly. Now geologists at MIT have offered up an answer i.e.
India was pulled northward by the combination of two subduction zones regions in the Earth’s mantle where the edge of one tectonic plate sinks under another plate. As one plate sinks, it pulls along any connected landmasses. The geologists reasoned that two such sinking plates would provide twice the pulling power, doubling India’s drift velocity.
The team found relics of what may have been two subduction zones by sampling and dating rocks from the Himalayan region. They then developed a model for a double subduction system, and determined that India’s ancient drift velocity could have depended on two factors within the system: the width of the subducting plates, and the distance between them. If the plates are relatively narrow and far apart, they would likely cause India to drift at a faster rate.

Based on the geologic record, India’s migration appears to have started about 120 million years ago, when Gondwana began to break apart. India was sent adrift across what was then the Tethys Ocean, an immense body of water that separated Gondwana from Eurasia.