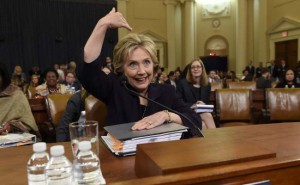 WASHINGTON: Hillary Clinton had one mission during her daylong testimony in front of a House select committee investigating the 2012 attacks in Benghazi, Libya: Don’t get angry.
Clinton’s last appearance before the committee – in January 2013 – was defined by a single moment in which Clinton lost her temper with Wisconsin Sen. Ron Johnson (R) when he probed about the genesis of the attacks.
“What difference, at this point, does it make?” Clinton shouted at Johnson, waving her arms demonstrably.Republicans immediately seized on that made-for-cable-TV moment as a sign of Clinton’s frustration at being asked to explain the deaths of American diplomats. Soon, it was all over the Internet.
Clinton clearly had that outburst on her mind as she prepared for the marathon day of questioning about what she knew, when she knew it and how she reacted in the run-up and wake of the attacks in Benghazi.
Her opening statement was a somber remembrance of the four men who died that fall day in 2012; she cast her appearance before the committee as her way of honoring their service. Time after time, she refused to be goaded to anger by pointed questions by Republican members of the committee, deflecting the queries with either humor or unfamiliarity. (I don’t know those people, I didn’t see that document etc.)
At the same time, Clinton was far from deferential when she disagreed. Kansas Rep. Mike Pompeo (R), for example, pushed Clinton to explain why so many security requests regarding Benghazi had been made but not fulfilled. “I have to respectfully disagree,” Clinton said. “Many security requests were fulfilled.”

And so it went. Republicans doing everything they could to force Clinton into an admission that her timelines or her assumptions were wrong, Democrats allowing Clinton time to clean up any mistakes or misstatements she made while bashing their GOP colleagues for the partisan nature of the hearing.
The most heated exchange of the hearing, in fact, came between committee Chairman Trey Gowdy (R-South Carolina) and Ranking Member Elijah Cummings (D-Maryland) at the end of the morning session over the role Clinton friend Sidney Blumenthal played in influencing Clinton’s thinking on Libya. Clinton, fittingly, stayed entirely out of the fray.
As the hearing wore on — and the politicians got tired — things turned slightly more pointed. Gowdy pushed Clinton repeatedly on the neutrality — or lack thereof — of the State Department’s Accountability Review Board, which led Clinton to “apologize” for his dislike of the ARB’s findings. She also forcefully defended the work (and honor) of retired Admiral Mike Mullen who led the ARB.

The newslessness of the hearing was a triumph for Clinton. There was no negative sound bite from her. No acknowledgement of error. No moment of real weakness or confusion about the events that unfolded on Sept. 11, 2012. The hearing was, in a word, boring. And that’s exactly what Clinton wanted.