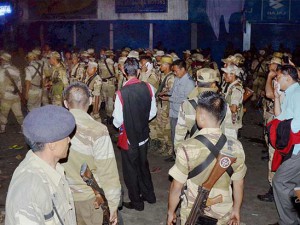 NEW DELHI/ KOHIMA: The Centre has sought a report from Nagaland on the mob lynching of a rape-accused man by a mob in Nagaland’s Dimapur, and put neighbouring Assam on high alert for possible violence.
The mob had broken into the prison where the rape-accused was being held and dragged him out on to the streets naked before lynching him and hanging his body from a clock tower. Nagaland Chief Minister TR Zeliang told NDTV that a high-level inquiry has been ordered into the incident. The state government has also suspended the Collector and the police chief of Dimapur District.

The Army has been placed on standby in both Nagaland and Assam. The Nagaland government has also sought the assistance of paramilitary forces to restore normalcy in the region.
One person, suspected to have been part of the mob that pulled the alleged rapist out of the prison, succumbed to injuries he had sustained when police opened fire. A total of five people sustained injuries in the police action. An estimated 2,000 people had taken part in the lynching.
“We have sought a report from the Nagaland government about the incident and how a mob entered a jail and pulled out an inmate,” said an official of the Union Home Ministry.
Meanwhile, Home Minister Rajnath Singh said that he has already discussed with senior officials about the incident and asked them to take necessary action. “I have already discussed (it) with the officials concerned. All necessary steps have already been taken,” he said.
The central government also alerted neighbouring Assam, and asked it to step up vigil so that no untoward incident takes place along its border with Nagaland, officials said.
“This is a very unfortunate incident that took place yesterday… Actually the culprit was booked, and forwarded to judicial custody and he was in Central Jail. But despite public asking to extend the interrogation and take action on the culprit. They forcibly they have taken out. So, the security people were overpowered and they could not contain the situation,” Mr Zeliang told NDTV today morning.
“The Governor immediately had the cabinet meeting and appealed to the people to come down. Whatever happened, happened. But… constituted enquiry committee, high level enquiry committee. So now, the government will enquire into the matter, seriously,” he added.