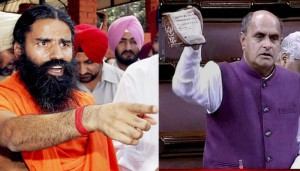 NEW DELHI: Amid the controversy over a purported ayurvedic product by yoga guru Baba Ramdev’s Divya Pharmacy promising male child, Union Health minister JP Nadda on Friday promised to look into the matter.
This was confirmed by Union Consumer Affairs, Food and Public Distribution minister Ram Vilas Paswan, who said said the Union Health minister has been asked to looking into the matter.

“It is a gender issue. If you are asking for only a male child, it is illegal. The health minister has asked to look into the matter,” he said here today while reacting to the uproar in the Rajya Sabha yesterday over ‘Divya Putrajeevak Beej’ allegedly sold by Divya Pharmacy.
“However, you cannot bring this (product) under misleading advertisement. It says it guarantees a son and no one is challenging that the medicine is bad,” he said.
Without elaborating whether his ministry is taking any action on the medicine at a time when the NDA government was carrying out its ‘Beti Bachhao’ campaign, Paswan said if a product did not deliver what it promises only then can it be misleading.
The opposition had demanded to ban the purported ayurvedic product in Rajya Sabha yesterday while terming it as illegal and unconstitutional and sought stringent action against the manufacturers.