NEW DELHI :Bollywood actress Hema Malini, who is making her maiden foray in this year’s Lok Sabha elections, said on Saturday that she is very happy that the BJP has fielded her from Mathura for the upcoming Lok Sabha polls.”It is nice that I am contesting from Lord Krishna’s land and Narendra Modi is contesting from Lord Shiva’s land,” she said at a press conference in Delhi. 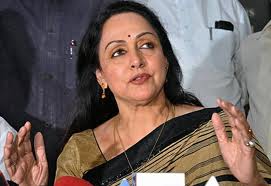 The 65-year-old actress also said her association with Mathura is almost two decades old.”I have been associated with Mathura for almost 20 years. Whenever I come to Delhi, I always go to Mathura and Varanasi. I am a devotee of Lord Krishna, so when BJP asked me to contest from Mathura, I was very happy,” she said.”If I win, with the grace of Lord Krishna, I would clean river Yamuna. There are many things to be done in Mathura, and cleanliness is another issue I would like to address,” she added.
The “Dream Girl” emphasised on the need to clean rivers for balancing the ecosystem.In Mathura, Hema Malini is pitted against Rashtriya Lok Dal’s (RLD) general secretary Jayant Chaudhary, the son of party chief Ajit Singh.The actress, who has given memorable performances in movies like “Sholay”, “Seeta aur Geeta”, “Satte pe Satta” and “Baghban” was also member of the Rajya Sabha between 2003 and 2009.
Her husband, Bollywood actor Dharmendra, too has been actively involved in politics, serving a term in the 14th Lok Sabha (2004-09) after being elected from Rajasthan’s Bikaner on a BJP ticket.