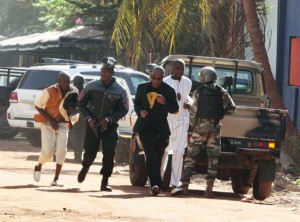 Men shouting “God is great” and armed with guns and throwing grenades stormed into the Radisson Blu Hotel in Mali’s capital on Friday morning and seized 170 hostages.
The U.S. Embassy in Mali asked citizens to shelter in place amid reports of an “ongoing active shooter operation” at the hotel in Bamako.
The U.S. and French embassies told their citizens in Bamako to take shelter wherever they are.Following a military coup in 2012, Islamic extremists took control of northern Mali, prompting a French-led military intervention in early 2013 that forced the extremists from northern towns and cities, though the north remains insecure and militant attacks have extended farther south this year.

In March masked gunmen shot up a restaurant in Bamako, located in Mali’s south, that is popular with foreigners, killing five people.
ofGunmen went on a shooting rampage at the luxury Radisson Blu hotel in Mali’s capital Bamako today, seizing 170 guests and staff in an ongoing hostage-taking, the hotel chain said.
Automatic weapons fire could be heard from outside the 190-room hotel in the city-centre, where security forces have set up a security cordon, an AFP journalist said.Security sources said the gunmen were “jihadists” who had entered the hotel compound in a car that had diplomatic plates.
“It’s all happening on the seventh floor, jihadists are firing in the corridor,” a security source told AFP. The shooting follows a nearly 24-hour siege and hostage-taking at another hotel in August in the central Malian town of Sevare.Four soldiers, five UN workers and four attackers were killed.
The shooting at the Radisson follows a nearly 24-hour siege and hostage-taking at another hotel in August in the central Malian town of Sevare in which five UN workers were killed, along with four soldiers and four attackers.
Five people, including a French citizen and a Belgian, were also killed in an attack at a restaurant in Bamako in March in the first such incident in the capital.
Islamist groups have continued to wage attacks in Mali despite a June peace deal between former Tuareg rebels in the north of the country and rival pro-government armed groups.
4:20 pm : At least three hostages killed in Bamako hotel siege: said a Minister. 4:10 pm: Mali security forces evacuate around a dozen hostages from hotel, says Ministry. 3:50 pm: Turkish airlines has six staff members inside attacked hotel in Mali capital, says Turkish official. 3:30 pm: Mali hotel gunmen free some hostages, including those able to recite verses of the Koran, security sources said.
3:09 pm 170 people taken hostage by two attackers in Bamako hotel in Mali, Manager of Radisson Blu, quoted by BBC.3:08 pm Around 10 gunmen believed to be inside Radisson Blu Hotel, said security source.