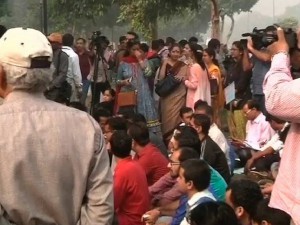 NEW DELHI: After meeting President Pranab Mukerjee at the Rashtrapati Bhavan on Saturday, Bollywood veteran actor Anupam Kher said that the former has conveyed to him that the Constitution must be revered at all costs and those who are returning the awards must remember that it had been bestowed upon them by the people of the nation, not the government.
“As far as the Award Wapsi is concerned the President said that these awards were not given by the government, instead, it was given by the people of the country,” Kher told reporters in Delhi. 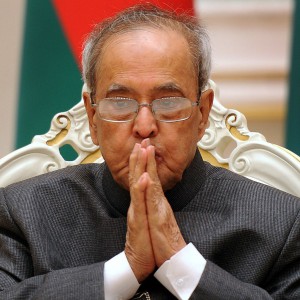 “The President also said that the Constitution of the country was designed on a secular fabric and we all should all respect that,” he added. Kher announced that Prime Minister Narendra Modi has agreed to meet the delegation in the evening at his residence.

The actor led a march to the Rashtrapati Bhavan on Saturday in New Delhi to protest against the voices being raised over “intolerance” in the country. The actor claimed that the intolerance debate is an attempt to malign the image of the country and is intended to target the Narendra Modi-led government at the Centre.

Kher also stated that he was going to meet PM Narendra Modi at 6:30 pm on Saturday. Earlier, countering the protests by writers and artistes against “rising intolerance”,
Bollywood actor Anupam Kher on Saturday led a march to Rashtrapati Bhavan alleging that the “award-wapsi” campaign was to defame the country by projecting a “wrong” picture of the situation.
“India is a very tolerant country. Some people have coined the term ‘growing intolerance’. They are very few. Not every Indian thinks like that. We are secular people. We do not believe in pseudo-secularism, selective outrage or selective patriotism,” Kher, who is the spouse of BJP MP from Chandigarh Kirron Kher, told reporters.

“We had a meeting with a lot of writers, artistes, filmmakers and they also believe that there is no intolerance in the country… This march is a symbolic gesture on part of a lot of people over here who say India is one and free of intolerance,” the 60-year-old said.

Many filmmakers and artistes from the fraternity including Madhur Bhandarkar, Ashoke Pandit, Priyadarshan, Manoj Joshi, Abhijeet Bhattacharya and writer Madhu Kishwar joined the march to hand over a memorandum signed by more than 40 personalities including actress Raveena Tandon.
Bhandarkar, a National Award winner, alleged that those involved in the protest over intolerance had opposed Prime Minister Narendra Modi before he was elected, which raised questions about their intention.
“The projection that is happening for the past few days is very sad. The people who were against Modiji during elections are the same people who are coming out right now.
“The whole projection and narrative that is going abroad is wrong. It is a diverse country and of course there are incidents but we all condemn them. There is no two ways about it,” he said. Kher asserted that they were not associated with any organisation or political party. “This march is led by Indians and for Indians.” Film-maker Priyadarshan said the act of returning the awards is “childish”.
“People returning awards are doing a childish act. They should use the power of pen. Instances of intolerance have always been there. It is not something that happened yesterday. Shah Rukh Khan never said he is returning award,” Priyadarshan told Reporters. “They are respected people but behaving like school children,” Priyadarshan said. He, however, disapproved of those critical of Khan who had said that there was extreme intolerance in the country.
At least 75 members of the intelligentsia have returned national or literary awards in an escalation of protests by writers, historians, filmmakers and scientists over “growing intolerance”, voicing fears that the country’s robust democracy might be “coming apart” in the current atmosphere.
The BJP-led government has dismissed the protest as “manufactured rebellion” and “politically” motivated.