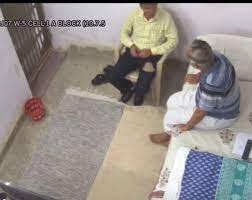 NEW DELHI : A fresh Satyendra Jain video has come out with the incarcerated AAP minister is seen holding ‘darbaar’ inside the jail cell. Video of jailed Delhi minister Satyendar Jain meeting a jail Superintendent inside the prison surfaced on Saturday. This video, said to be of September 12, Jain can be seen interacting with four persons when the Superintendent arrives.
The minister courted controversy after a video of him getting a massage from a convicted rapist surfaced. The AAP called it ‘physiotherapy’ after the BJP slammed the video and the motives behind the minister availing these special services. After that another video had surfaced in which the minister was seen enjoying a meal and clearly flouting the jail rules revolving around food. Keep watching to know more about it!

The AAP called it ‘physiotherapy’ after the BJP slammed the video and the motives behind the minister availing these special services. After that another video had surfaced in which the minister was seen enjoying a meal and clearly flouting the jail rules revolving around food.
As per sources, the jail authorities have initiated an inquiry into the matter as to how the CCTV footage are being leaked. Jain has also moved a court in this regard. The Tihar Authority is yet to issue an official statement on the matter.
CCTV video of his prison cell shows him hosting guests, and also features a visit from a now-suspended Tihar Jail superintendent. AAP Convenor and Delhi Chief Minister Arvind Kejriwal, who has accused the BJP of using central agencies to go after its leaders in order to harm them in polls, today said the election is BJP’s 10 videos versus his 10 guarantees to the people.
The almost 10-minute-long video clip, from September 12 around 8 pm according to the time stamp, shows Mr Jain relaxing in his bed when he is visited by three people in casual clothing. A few minutes in, Ajit Kumar, superintendent of jail number seven at that time, walks in and interacts with Mr Jain while the rest walk out.
Satyendar Jain was earlier seen getting a massage by a man inside his cell, and chatting with other inmates, none of which is allowed inside the prison. He was also seen eating fruit salad, bringing his complaint on food quality in jail under question.
While AAP had claimed that these were “physiotherapy sessions” recommended by his doctor following his spinal surgery, the claim was demolished by sources who said the “masseur” was a prisoner, accused of raping his own daughter.
The videos have become a flashpoint between the BJP and AAP ahead of Delhi civic body polls next month, with the BJP demanding Mr Jain be moved out of Tihar jail on account of ‘special treatment’. BJP leaders have flooded social media with security camera footage almost every day to bolster their allegation that AAP, which rallied against corruption and ‘VIP treatment’, is in fact indulging in the same. They accuse Mr Jain of enjoying special perks while awaiting trial.
The clips started surfacing days after the Enforcement Directorate accused Mr Jain, who was arrested in a money laundering case, of getting special treatment inside Tihar Jail. The “VIP treatment” allegation led to the transfer of at least 12 Tihar jail officials besides the Director General (prisons), Sandeep Goel. Mr Jain has been in jail since June. A Delhi court denied his bail request last week.
Delhi Chief Minister Arvind Kejriwal on Thursday came out in defence of his minister Satyendar Jain, saying that his treatment in prison has been by the book. “There were no VVIP facilities in jail for Satyendar Jain. All that he got was according to the jail manual. The man is eating roti, you ask why is he eating roti. What kind of politics is this?” Mr Kejriwal said at an NDTV townhall.
Mr Kejriwal turned the accusations around to target Home Minister Amit Shah, claiming he had special privileges while in jail in Gujarat. “If you want to see VVIP culture in jails, see what the CBI chargesheet says about when Amit Shah was in jail. They made a deluxe jail for him. In Satyendar Jain’s case, the court has said nothing about VVIP culture – Will the court decide or will you or the BJP decide on what is VVIP culture?” Mr Kejriwal said. Amit Shah was arrested and jailed briefly in 2010 over allegations of the extra-judicial killing of Sohrabuddin Sheikh, an underworld criminal. The case against him was dropped in 2014 for lack of evidence.
(Bureau Report with Media Inputs).