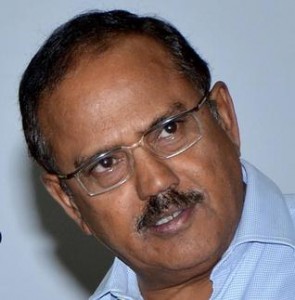 NEW DELHI: It’s official now. Former Intelligence Bureau (IB) Director Ajit Kumar Doval has been appointed as National Security Advisor, or the NSA, to Prime Minister Narendra Modi.A hands-on officer, Mr Doval, 69, assumes his new role at the back of a formidable reputation. The 1968-batch IPS official, who belonged to the Kerala cadre, was the first policeman to be decorated with the Kirti Chakra, the second-highest peacetime gallantry award behind Ashok Chakra.
Mr Doval retired as the IB Director in 2005, but before his superannuation, he held several important assignments. He spent 6 years in the Indian High Commission in Pakistan. He was pressed into service after 5 Pakistan-based terrorists hijacked the Indian Airlines Flight No. IC-814 which had taken off from Kathmandu on December 24, 1999, and was on its way to Delhi. He was among the officers who negotiated the release of the passengers.
He was part of several counter-terrorism operations in Mizoram, Punjab and Jammu and Kashmir. He took part in Operation Black Thunder, undertaken in 1988 to flush out Sikh militants holed up inside the Golden Temple in Amritsar.After his retirement, Mr Doval had started the Vivekananda International Foundation, a think-tank known to take up nationalist causes.
Soon after being sworn in as India’s 15th Prime Minister, Mr Modi had appointed former Telecom Regulatory Authority of India (TRAI) chairman Nripendra Misra as his Principal Secretary.