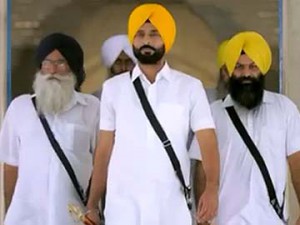 NEW DELHI:  A Punjabi film on the assassination of former Indian prime minister Indira Gandhi will not be released tomorrow, the Ministry of Information and Broadcasting has said.Leaders from the Congress and the BJP from Punjab had warned that the film could endanger public peace in the state because it portrays the Sikh bodyguards who shot Mrs Gandhi as heroes.
Today, sources in the  Home Ministry also reportedly sought clarifications on whether the makers of the film are among a group of producers who allegedly bribed the head of the censorship board to get clearances for screening. Rakesh Kumar, the chief executive of the censorship board, was arrested on Monday in Mumbai.
“Kaum De Heere,” or “Diamonds Of The Community” tells the story of  Mrs Gandhi’s Sikh bodyguards who shot her  in 1984 in revenge for Operation Bluestar which saw soldiers entering the Golden Temple, Sikhism’s  most holy shrine, to flush out militants holed up there.After Mrs Gandhi was assassinated, thousands of Sikhs were killed in the capital in revenge riotsOne of the Prime Minister’s bodyguards, Beant Singh, was killed by the police shortly after the  murder, while the other, Satwant Singh, was later hanged.Director Ravinder Ravi had defended his film to a newspaper earlier this week, saying it has “no heroes or villains.”