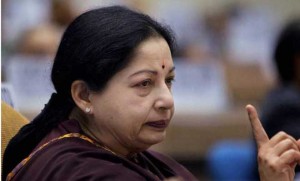 Chennai : Expressing dismay over reports of Indian Coast Guard participating in naval exercises with Sri Lankan Navy, Tamil Nadu Chief Minister Jayalalithaa on Saturday asked Prime Minister Manmohan Singh to recall the two ships and Coast Guard personnel participating in the event in the island nation
“This is in complete and callous disregard of the strong views and emotions of the people of Tamil Nadu clearly and unambiguously conveyed in my earlier letters to the Prime Minister, through Assembly resolutions and through protests, agitations and demonstrations by the people of Tamil Nadu”, she said in a letter to Dr. Singh on Saturday.
Recalling her previous letter to Dr. Singh condemning the proposal made by Indian Naval Chief to enrol Sri Lankan Navy personnel in the four year Bachelor of Technology course offered to Indian Naval officers, she said, “I am totally dismayed to note from media reports that the Indian Coast Guard is participating in a marine defence exercise and has deputed ships, officers and men to Trincomalee, to participate in this exercise which is reported to be commencing there on 21st December, 2013.”
“The Government of India has still chosen to ride rough shod over the groundswell of emotions in Tamil Nadu and has persisted with its policy stance towards Sri Lanka”, she said.
“In fact, the Government of India has extended on open hand of cooperation to Sri Lankan Navy through the defence related exercise”, she said, adding, this is the same Sri Lankan Navy which continues to prey upon innocent fishermen from Tamil Nadu with impunity and subjects them to abduction, arrest, torture and long periods of detention.
“Such an overt act of defence cooperation with a nation that puts down its own hapless Tamil minority citizens and perpetrates serious human rights violations upon them, can only be termed as outrageous and condemnable”, she said.Strongly protesting against India’s proposal for defence cooperation with Sri Lanka, Ms. Jayalalithaa said it totally ignores the impact it may have upon the sentiments of the people of Tamil Nadu and also have a direct effect on the right to livelihood of the fishermen in the coastal districts of the State.

Referring to imparting of training to Sri Lankan defence personnel at the Defence Services Staff College, Wellington, in Tamil Nadu, Ms. Jayalalithaa said she had urged the Centre to “issue a clear policy direction that the Ministry of Defence should not hereafter provide training, or engage in any form of co-operation with the Sri Lankan Armed Forces, until satisfactory and credible action is taken by the Government of Sri Lanka“.
She said attacks and abductions of Tamil Nadu fishermen are followed by extended periods of detention in Sri Lankan jails, confiscation of boats, fishing nets had caused extensive economic losses and their families to considerable mental agony.“The entire fishermen community in Tamil Nadu is agitated over the acts of indiscriminate abduction of our fishermen on the high seas and their prolonged incarceration in prison”, she said.
Ms. Jayalalithaa also recalled the four resolutions passed in the assembly condemning the continuing discrimination against the Tamil minority in Sri Lanka and violation of their human rights and calling for strong response from the Government of India.PTI.