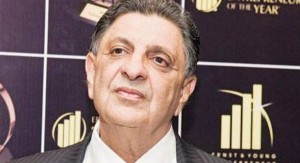 NEW DELHI: Pune-based industrialist Cyrus Poonawalla has purchased a US government-owned palace property called Lincoln House at Breach Candy in south Mumbai for a whopping Rs 750 crore.
It makes it the largest ever real estate deal in the country’s financial capital. The two-acre, sea-facing property housed the American consulate for several decades before it relocated to the city’s new business district of Bandra-Kurla Complex four years ago.
Lincoln House, formerly known as Wankaner Palace, was built in 1938 by the Maharaja of Wankaner (in central Gujarat). In 2011, the US government had set a reserve price of Rs 850 crore for the property, but found few takers.
The Poonawallas will make few changes to the house which was earlier used as an office by the US consulate. The high-profile deal comes within a week of leading industrialist Kumar Mangalam Birla setting a record last week when he paid Rs 425 crore for Jatia House in the plush Malabar Hill area.