NEW DELHI : BJP PM candidate Narendra Modi on Thursday said his criticism of different regional political parties during the ongoing poll campaign will not come in the way of forming alliances with them later.“Politics isn’t conducted on the basis of what is said in the course of election campaigns,” Modi said in an interview to TV channel Times Now, to a query if his criticism of parties headed by regional leaders like Jayalalithaa (AIADMK), Mayawati (Bahujan Samaj Party) and Mamata Bannerjee (Trinamool Congress), among others, would come in the way of taking their support to form a government later. 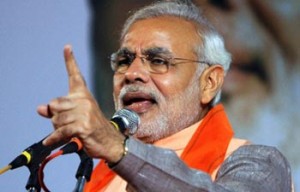 “Elections bring about a different kind of atmosphere. Every party spreads awareness about itself,” he added.Claiming that when he was announced as the Bharatiya Janata Party’s PM candidate, the “mainstream media across the country had only one centre story – that the BJP would find no allies”. He said that the party now had 25 allies.“For the first time in India’s political history, the BJP has 25 parties in a pre-poll alliance in the electoral fray. Even during the NDA regime, we didn’t have a pre-poll alliance. The Congress too has never had a pre-poll alliance on this scale,” he said.
Asked why he had started to criticise Bannerjee when he had spoken positively in the beginning of his poll campaign about developmental work being initiated by her, Modi said that he had not done his full research when he first visited West Bengal.“When Didi came to power, what I thought was that she can contribute in a large manner. I had positive hopes from her. When I went there, I hadn’t done full research. Whenever I met Didi, she was very cordial and I really thought she will do something for Bengal. So I praised her and said that she was working towards a change that Left parties had merely promised for 35 years.
“But, then I started receiving numerous mails and information, I was stunned and felt that I should have said things after thorough research,” said Modi.Asked if he should not keep open the option of allying with Bannerjee and Mayawati, he said “this can also be a strategy to keep the door open” but did not elaborate further.