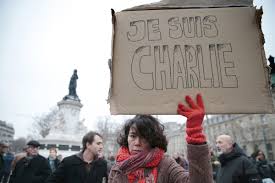 PARIS: Prophet Muhammad will hold a ‘Je suis Charlie’ sign in new Charlie Hebdo cartoon, as per media reports on Monday.In the edition which is due to come out on Wednesday, called the ‘survivors’ edition of the French satirical weekly, Prophet Mohammed is holding up a ‘Je suis Charlie’ sign under the words – ‘All is forgiven’ – as per AFP.
It also reportedly shows Prophet Muhammad with a tear in his eyes.The slogan ‘Je suis Charlie’ or “I am Charlie” has been widely used by people all over the world in support of the French satirical magazine following last Wednesday’s terror attack.
This will be the first issue of the weekly since the attack in Paris office which left 12 people dead, including its editor, Stéphane Charbonnier, also known as Charb.
The latest edition will have three million copies, as per its distributors.Distributors MLP had initially planned to print one million copies of the issue, as per AFP, but said demand from France and abroad has been huge.
The weekly is currently being put together by survivors of last week’s shooting at the magazine’s offices in Paris in which its top cartoonist were killed.The special issue will also be offered “in 16 languages” for readers around the world, one of its columnists, Patrick Pelloux, said.
The original paper printed at 60,000 copies a week, selling 30,000.The surviving Charlie Hebdo staff have since Friday been working out of the offices of another French newspaper, Liberation, with equipment loaned by other media organisations.
Their own blood-soaked offices remain sealed by police, with the entrance covered with flowers, pencils and candles in tribute to the dead.The gunmen were later killed by the French authorities after a massive hunt.
The gunmen, brothers Cherif and Said Kouachi, claimed to belong to the jihadist group al Qaeda in Yemen.
They were killed on Friday, as was an accomplice claiming affiliation to the rival Islamic State group, Amedy Coulibaly, in separate but coordinated French commando raids on sites in and near Paris where they had taken hostages.
In all 17 people and the three Islamist attackers were killed in three days of violence.The incident shocked the world and there has been a huge support for the weekly all over the world.There was a unity rally in the French capital on Sunday in which thousands participated, including world leaders.