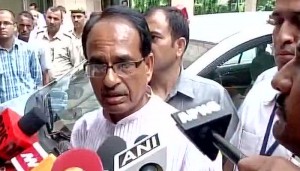 NEW DELHI: Under tremendous pressure in the wake of rising number of deaths linked to the Vyapam scam, Madhya Pradesh Chief Minister Shivraj Singh Chouhan on Wednesday virtually ruled out his resignation arguing the Opposition has been creating roadblocks for his government.
“The Congress and the Opposition cannot tolerate the path of progress under me in Madhya Pradesh. They have been demanding my resignation from the beginning. They are bringing disrepute to Madhya Pradesh,” he told reporters here when he was asked about the demand for his resignation.
Chouhan, who is in Delhi to meet the top BJP leadership in view of the Vyapam scam related deaths, however said that his government would urge the Supreme Court as well to order a CBI probe into the matter.”We requested the (Madhya Pradesh) High Court that the probe should be done by CBI. The matter is likely to come up before the Supreme Court tomorrow. We will make the same prayer there too,” Chouhan said.
To a question as to why he had not sought a CBI probe into the matter earlier, the Madhya Pradesh CM said, “I believed that the Vyapam scam probe was progressing well and there was no need to hand it over to the CBI. However, I decided to order a CBI probe keeping in mind the incidents that took place over the last few days.

Chouhan said he had full faith in the Supreme Court and High Court and in a democracy the rulers should be servants of the public and be beyond doubt.”That is why yesterday I sent a request to the High Court for a thorough CBI probe into the Vyapam matter under the High Court-monitored STF (Special Task Force),” he said.The chief minister said death of people related to the scam was unfortunate and he was confident that truth would come out in a CBI probe.
To a query on why the probe has not covered the state Governor, he said the High Court has held that he was a constitutional authority, implying he enjoyed immunity.Meanwhile, the Madhya Pradesh High Court today deferred till July 20 the hearing on the plea of the state government seeking handing over of the Vyapam scam probe to the CBI.
A division bench of the High Court comprising Chief Justice Ajay Manikrao Khankilwar and Justice Alok Aradhe deferred the hearing on the ground that the Supreme Court is to hear a clutch of similar pleas tomorrow, Additional Advocate General (AAG) P Kaurav said.