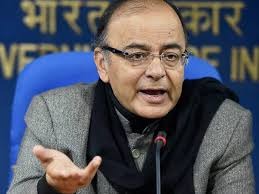 NEW DELHI : Finance Minister Arun Jaitley on Saturday unveiled a budget that aims to ramp up growth, aided by a slowed pace of fiscal deficit cuts and a raft of tax measures to put private domestic and foreign capital to work.
In his first full-year budget since Prime Minister Narendra Modi’s landslide election victory last May, Mr Jaitley said the country’s economy was about to take off. PM Modi tweeted that the budget would “further reignite our growth engine”.
The markets, volatile through the day as announcements were digested and small print was analysed, settled in the green. The Sensex posted its first Budget day gain in four years, rising 141 points to end at 29,361.50.

The budget was a test of the PM’s willingness to reform Rs. $2 trillion or Rs. 124 lakh crore ($1 = Rs. 62) economy with a bloated public sector and weak private investment, obstacles to delivering on his pledge to voters of “achche din” or “better days”.
While seeking to spark an investment-led boom, the budget was short on structural reforms, with the government leaving major welfare schemes untouched and only cutting fuel subsidies thanks to a collapse in international oil prices.
“People who urged us to undertake ‘big bang’ reforms also say the Indian economy is a supergiant, which moves slowly but surely,” Mr Jaitley told parliament as he wrapped up a 90-minute speech. “Even our worst critics would admit we have moved rapidly,” he said.
Some hours later, at a press conference he said, “Many people have told me you must have a big bang idea. I have asked them to suggest one.”
Mr Jaitley has promised higher investment in India’s decrepit roads and railways, offered the carrot of corporate tax cuts to global corporations and the stick of tighter compliance rules to get Indian tycoons to invest at home rather than stash wealth abroad.\

Although Mr Jaitley forecast that growth would accelerate to 8-8.5 per cent in the fiscal year starting in April, up from 7.4 per cent this year, businesses have yet to respond to PM Modi’s call to “Make in India”.
Mr Jaitley forecast inflation at 5 per cent by the end of the fiscal year ending March 2016, undershooting the Reserve Bank of India’s 6 per cent target and creating room to cut interest rates. Annual inflation was 5.1 per cent in January.
But he pushed back by a year, to 2017/18, a deadline for cutting the fiscal deficit to 3 per cent of gross domestic product. In 2015/16, the deficit will be 3.9 per cent of GDP, above the 3.6 per cent target inherited from the last government.
In volatile trading, the NSE share index gained as much as 1 per cent as Jaitley gave an upbeat economic outlook, but went into the red on his comment that the fiscal deficit would slip, and traded 0.4 percent lower after his speech.
Radhika Rao, an economist at DBS in Singapore, said the deficit slippage was unlikely to draw the immediate ire of credit-rating agencies, and she expects the private sector to follow the lead set by the government, which is hiking capital investment by a quarter to $39 billion.
“Today’s budget was pragmatic, wide-ranging and inclusive,” Ms Rao said.The budget concentrates a year’s economic policymaking into a single speech, and the range of measures Mr Jaitley announced included a monetary policy overhaul, a bankruptcy code and the creation of a public debt management agency.
The 62-year-old finance minister, who underwent surgery last year to treat diabetes, sat down around 20 minutes into his speech and gave the rest from the government’s front bench.
In a key passage, Mr Jaitley said he would cut the tax on company profits to 25 per cent over four years from the current 30 per cent, high by international standards.
A national goods and services would enter force, as planned, in April 2016 but a controversial set of new rules to fight tax avoidance would be delayed by two years, he said.
Mr Jaitley scrapped a distinction between direct and portfolio investors, in a move designed to encourage foreign investors to take strategic stakes in Indian companies. He also simplified regulation of financial markets.
“This is a forward-looking budget,” said Krupa Venkatesh, a partner at Deloitte. “This clear statement of intent should bring cheer to industry.”
Reaping the benefits of low global prices for oil, the country’s main import, the Modi government said yesterday that India is in a sweet spot with spare cash to modernize its creaking infrastructure.
Mr Jaitley announced an increase of Rs. 70,000 crore($11.4 billion) in road and rail investments next year and announced that the government would commission five “ultra-mega” generation projects to end chronic power shortages.\
“My proposals… lay down the roadmap for accelerating growth, enhancing investment, passing on the benefit of growth process to the common man, woman, youth and child,” said Mr Jaitley. “This is the path we will doggedly and relentlessly pursue.”
The government has shied away from politically sensitive cuts in its $37 billion subsidy bill, seeking instead to boost efficiency of a rural jobs scheme that’s India’s costliest welfare programme. It will also boost direct welfare payments into bank accounts, and gradually replace benefits in kind.