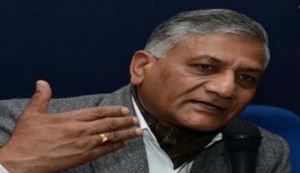 GHAZIABAD: The BJP is the only “nationalist” party while the Aam Aadmi Party (AAP) is “anti-nationalist”, BJP candidate and former army chief V.K. Singh said Thursday.Singh told media that he was not taking Ghaziabad’s AAP candidate Shazia Ilmi seriously. “This county cannot forgive anti-nationalists. They (AAP) are anti-nationalist. They are arguing for the Line of Control (LoC) to be made the international border. They advocate referendum in Kashmir.”Singh added: “The Bharatiya Janata Party is the only nationalist party.”
He said he was contesting the Lok Sabha election from Ghaziabad as “a patriotic and disciplined soldier” and that he had no particular opponent in the sprawling constituency bordering Delhi.“No one is my opponent. I am contesting this election against poverty, social disparities and the step-motherly treatment meted to this city.”He added that Congress governments had paid “low priority” to the needs of the military.
“And you will be shocked to know that Congress candidate Raj Babbar, chairman of the Parliamentary Standing Committee on Defence, does not know the ABCD about (armed forces).Singh said that if elected, he would pay attention to building basic infrastructure and develop the traffic system in Ghaziabad, which adjoins Delhi.He said he would also pay attention to improving the state of law and order in Ghaziabad.“Till now I have been engaged in securing the border from external threats. I will … now protect my countrymen from internal threats, with the same spirit.”