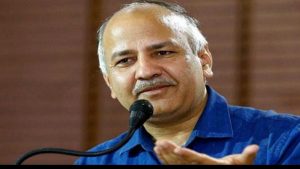 NEW DELHI : Delhi’s Deputy Chief Minister Manish Sisodia, charged by the CBI over allegations linked to a liquor policy, today claimed the BJP had offered to “shut all cases” against him if he quit the Aam Aadmi Party (AAP) and crossed over. Refuting the charge,
“I have received a message from the BJP – break AAP and join BJP. We will ensure that all cases by CBI and ED against you are shut,” Manish Sisodia tweeted two days after the CBI raided him and named him in a charge sheet on the alleged liquor policy case. Stressing that all cases against him are false, he challenged the BJP to do “whatever you want to do”.
Manish Sisodia has an audio recording of a BJP leader calling him with an offer to drop a CBI case against him if he left the Aam Aadmi Party (AAP) and helped bring it down, sources from his party claimed on Monday.
Sisodia on Monday claimed that he has received an offer by the BJP to vertically split the Aam Aadmi Party (AAP) in an alleged quid pro quo amid a CBI probe into the excise policy. He asserted that all the allegations against him were false and he will never bow down before “conspirators and corrupt people”.
BJP leader Manoj Tiwari claimed the AAP leader has been caught in corruption and hence is making up stories. “We keep wondering what new stories they will spin when we wake up in the morning,” he said. “My reply to BJP – I am a descendant of Maharana Pratap and a Rajput. I am ready to get beheaded but can never bow down before conspirators and corrupt people. All the cases against me are false. Do whatever you want to do,” he said in a tweet in Hindi.
AAP leader Saurabh Bhardwaj, backing the charge, said there are “three dozen examples” of the BJP pressuring leaders of rival parties with investigations and then dropping cases once they switched sides. Calling Arvind Kejriwal, his political guru, Mr Sisodia said he’d never betray him. “My message to BJP on offer to make me CM candidate – @ArvindKejriwal is my political guru, I will never betray him. I

Seemingly undeterred, Mr Sisodia last week doubled down saying the Delhi Excise Policy 2021-22 was the “best” of its kind and would have earned ₹ 10,000 crore every year but for a last-minute decision-change by former Lieutenant Governor Anil Baijal. Mr Sisodia  alleges that Mr Baijal changed his mind on allowing liquor shops in unauthorised colonies and that it led to a loss of thousands of crores to the city government.

Backing his deputy, Delhi Chief Minister and AAP Convenor Arvind Kejriwal said the BJP-led government is busy misusing probe agencies and plotting ways to bring down elected governments even as people suffer from skyrocketing inflation and a diving rupee. AAP alleges that cases against Mr Sisodia and other leaders are cooked up because the BJP fears the popularity of the party and its chief Arvind Kejriwal. Mr Sisodia has said that the 2024 general election is set to be a contest between Mr Kejriwal and Prime Minister Narendra Modi and accused the BJP of misusing central agencies to stop the AAP leader.
The CBI on Friday had carried out searches at 31 places including Mr Sisodia’s residence and the premises of some bureaucrats — former Excise Commissioner Arava Gopi Krishna and two other Excise Department officials and businessmen. AAP Rajya Sabha MP Sanjay Singh on Monday said the BJP is in a state of shock after the “offer” was made public, and that the BJP’s “model of filing CBI-ED cases and buy MLAs” has been attempted to topple governments in Maharashtra, Uttarakhand, Goa, West Bengal and other parts of India.The whole country is now watching BJP’s conduct and people will respond at the right time,” Singh said.
(With Bureau Inputs).