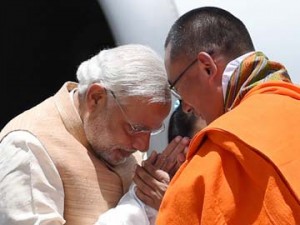 THIMPU: Prime Minister Narendra Modi – on his first foreign visit to Bhutan after taking over the post — received a red carpet welcome at the Thimphu airport today.Next on Mr Modi’s agenda is a ceremonial guard of honour at 3. 30 pm which is expected to be an extremely colourful programme.
Later, the Prime Minister will hold a one-on-one meeting with Bhutanese Prime Minister Tshering Tobgay. He will then inaugurate one of India’s assistance projects — the building of the Supreme Court of Bhutan.The Prime Minister will address a joint session of Parliament on Monday, and speculation is rife on whether he will do so in Hindi, a language understood by most people in this landlocked country.
Mr Modi will then go on to lay the foundation stone of the 600 MW Kholongchu hydropower project.The Prime Minister had made it clear that strengthening relations with member-nations of the South Asian Association for Regional Cooperation or SAARC was going to be the primary focus of his foreign policy initiative.Leaders of all eight SAARC nations, including Mr Tobgay, had been invited to Mr Modi’s grand swearing-in ceremony on May 26 in Delhi.
Ahead of his visit, Mr Modi had said Bhutan was a “natural choice” as his first foreign destination because of the “unique and special relationship” the country shared with India.He was invited to the hilly nation by King Jigme Khesar Namgyel Wangchuk and Prime Minister Tobgay.
Mr Modi is being accompanied by External Affairs Minister Sushma Swaraj, National Security Adviser Ajit Doval and Foreign Secretary Sujatha Singh.The two sides will explore ways to boost their ties, particularly in trade and hydro-electricity.
The fact that the Prime Minister chose Bhutan as his first foreign destination assumes significance since China has lately intensified efforts to woo it and establish full-fledged diplomatic ties with Thimphu.In his pre-departure statement, Mr Modi said relations with Bhutan will be a key foreign policy priority of his government.
“I am looking forward to my first-ever visit to Bhutan and to nurturing and further strengthening India’s special relations with Bhutan,” said the Prime Minister.