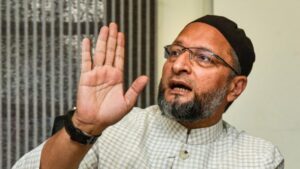 HYDERABAD: The All India Majlis-e-Ittehad-ul-Muslimeen (AIMIM) will contest 100 seats in the Uttar Pradesh assembly elections next year. AIMIM will field candidates in Muslim-dominated areas in the state’s western, central and eastern region. “We have only one agenda, which is the development of Muslims, but that does not mean we are opposed to others. We have started screening candidates, and we want good candidates, not necessarily only Muslims,” state party president Shaukat Ali told.
Owaisi is now looking to make inroads into UP. Earlier today, Mayawati refuted the reports that BSP will tie up with AIMIM in the elections and said that the party will fight alone. “This news is being broadcast in a media news channel since yesterday that the AIMIM and BSP will fight the upcoming assembly elections in UP together. This news is completely false, misleading and fact less,” she said in a tweet. The former UP Chief Minister added that except Punjab, BSP will not come into any alliance with any party in UP and Uttarakhand.
AIMIM had contested in the 2017 UP assembly polls as well but garnered only 0.2 per cent votes. Its performance in the recently concluded panchayat election in UP was good, and 24 candidates supported by the party won.  However, AIMIM’s grand opening in Bihar polls held last year in November boosted its confidence.  The party’s performance in the Bihar assembly elections was superb, and it won five seats – Amour, Kochadhaman, Jokihat, Baisi and Bahadurganj – in the Muslim-dominated Seemanchal region.
In Bihar, the AIMIM had fielded 20 candidates in the elections and joined the Grand Democratic Secular Front with Upendra Kushwaha’s Rashtriya Lok Samta Party and Mayawati’s Bahujan Samaj Party. Buoyed by its Bihar performance, Owaisi arrived in Lucknow in December last year and met former BJP ally Suheldev Bharatiya Samaj Party’s chief Om Prakash Rajbhar.After the meeting, he announced that AIMIM would join Bhagidari Sankalp Morcha, an alliance of smaller parties in UP led by Rajbhar.
Speculations of his party’s alliance with BSP are rife,  but Mayawati has said her party will not join hands with AIMIM and would contest the polls alone. The term of the current assembly elected in 2017 will expire on 14 March 2022. Owaisi said that he would fight the state elections in alliance with Om Prakash Rajbhar-led Suheldev Bharatiya Samaj Party (SBSP) and Bhaagidaari Sankalp Morcha.
(With Agency Inputs).